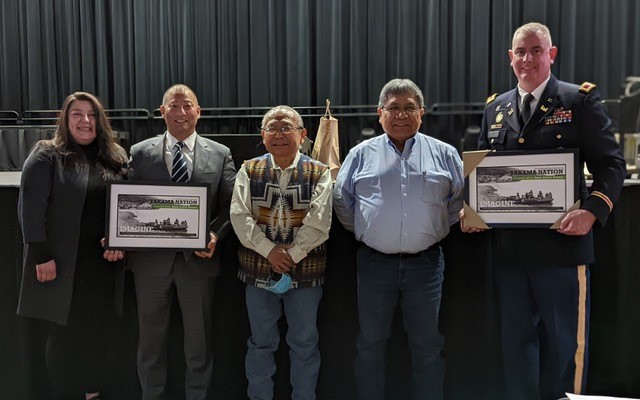 The Bonneville Dam Complex sits in the Columbia River between Portland and Hood River. Within the complex is Bradford Island, historically used by the Army Corps of Engineers for chemical and equipment storage, as well as a hazardous waste landfill. In late March of this year, after nearly two decades of protest from the Yakama Nation, other tribes and environmental groups, the Environmental Protection Agency (EPA) listed Bradford Island as a Superfund site– a priority list for the most contaminated sites in the country.

The levels of contamination in the water around Bradford Island more than qualify for Superfund site listing. According to Rose Longoria, the Regional Superfund Projects Manager for the Yakama Nation, testing for the levels of Polychlorinated Biphenyls (PCBs) in the tissue of fish is a major indicator of contamination levels. The fish near Bradford Island were found to have over 300,000 times the acceptable level of PCBs for human consumption– the highest levels of PCBs in fish across the nation. These PCBs can cause cancer and other serious health problems when consumed. For reference, the Lower Duwamish River that runs through Seattle is also a Superfund site, but the highests levels of PCBs ever found in fish there are around 1,100 times the acceptable levels.

While Bradford Island has been in use since the 1940s, the Army Corps of Engineers only began testing for contamination in 1982. Despite being aware of the record high levels of PCBs for decades, they largely ignored the Yakama Nation’s requests to implement a clean-up plan. “For seven years we tried working with them and reaching a path forward. And then we finally sued them,” Longoria says.

Even after the Yakama Nation won the lawsuit, Longoria says that the relationship between the Corps and the Yakama Nation did not improve, “but what did improve is our ability to really dig into and understand information more and be able to do our own analysis,” she explains. Longoria says they began to understand that the Corps was attempting to avoid the issue. “They were trying to manage this in a way that would get it off their plate as soon as they could but it wasn’t working,” she said.

According to Longoria, the state governments of Washington and Oregon– as well as the US Fish and Wildlife Service– were helpful partners once the issue was brought to their attention. The state and federal agencies worked with the Yakama Nation and the Army Corps to develop an understanding of how all the parties would work together on the project. After two years of negotiating the Army Corps decided to pull out of the agreement. Longoria says at this point the Yakama Nation decided to petition the EPA. Yakama Nation had tried petitioning the EPA in the past, but the Trump administration had shut them down. “As soon as Biden was elected, we reached out to the White House transition team and actually set up a meeting with their liaison to EPA,” Longoria says. After the EPA went through their ranking process, the island got listed as a Superfund site in March.

However, the listing as a Superfund site is only the beginning. According to Longoria, it typically takes 22 years to reach a clean-up plan for a Superfund site. To ensure Bradford Island isn’t neglected due to bureaucratic inefficiency, the Yakama Nation has received guarantees from the EPA to treat this project as an environmental emergency. The EPA has set up milestones to expedite the process and some removal of the toxic waste in the waters around the island will begin within the year.

Meanwhile, the communities near Bradford Island continue to be affected by the high levels of contamination and the Army Corps lack of response to the issue. Ubaldo Hernández, a senior organizer for the environmental group Columbia Riverkeeper, works with the Yakama Nation on community outreach for the Bradford Island project. A big part of his role in this project is to get the people who fish these waters to be aware of the dangers. According to Longoria, much of the impact disproportionately affects the Native community as the waters around the island are a traditionally important fishing ground. “In terms of an area where tribal members go to fish it’s densely populated,” she said.

According to Hernández, the Army Corps had issued a warning not to eat fish from this section of the river. However, as Hernández went to inspect the area, he found no signs or indications to warn fishermen (locals and those coming from Portland and surrounding areas) of the danger. “I approached them and told them ‘hey, you know, this is a highly contaminated, toxic site.’ And they were like ‘I never heard about it. I fish here all the time’,” Hernández says.

In addition to warning people of the health hazards, Hernández works to involve the community in activism. Hernández feels the Superfund site listing would have been impossible without the participation of the Native communities and other locals. “This is how we work,” he says, speaking of Columbia Riverkeeper, “Empowering voices of our community, giving information and presenting tools to participate.” Hernández emphasized that the biggest way for people to get involved is to spread the word.

According to Longoria, tribal members are typically targeting salmon when fishing around Bradford Island. Because salmon are not resident fish (only passing through while traveling upstream to spawn) the danger of contamination is lower. However, it is common for fishermen to catch and eat resident fish. Without being informed by the agencies responsible, the health hazard remains a significant problem and will be until a clean-up process is started.