Looking Forward and Looking Back: [A] Hip Hop Music History 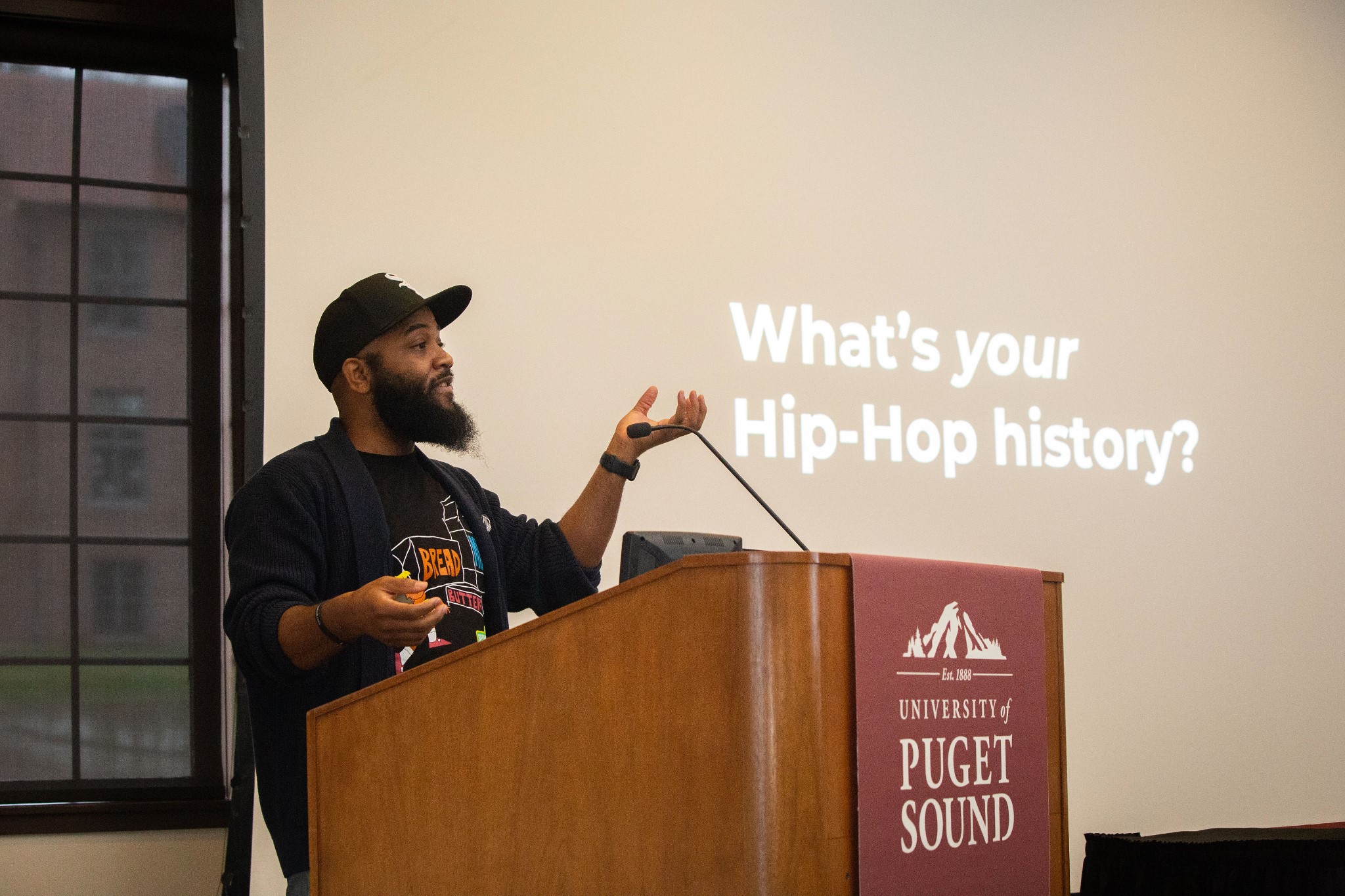 The event was held in person in the Rasmussen Rotunda. Having Dr. Carson in the room with the audience contributed to a warm atmosphere.  Fourth-year and African American Studies major Donovan Wilson shared that he valued “Seeing the impact that African Americans have had on the industry of hip hop and rap.” A weekend full of events complimented the talk, including a listening session and a trip to the Museum of Pop Culture’s exhibit, ‘Contact High’ in Seattle.

Dr. Carson wears multiple hats: professor, scholar, and musician. As an Assistant Professor at the University of Virginia, he teaches classes on hip hop and the global south. One of his greatest accomplishments was making an album, “I used to love to dream,” which became the first rap album ever peer-reviewed by an academic press. Dr. Carson underscores the importance of bringing historically underrepresented voices into the narrative.

A strong emphasis of Dr. Carson’s talk is history’s omission of certain people. He pointed out that the forgotten are often women, crediting Sylvia Robinson as the creator of the first rap record, something he feels is too commonly ignored. This component of the presentation stood out to Dr. LaToya Brackett, African American Studies professor at Puget Sound and organizer of the event. “It’s talking about the true history, and the origins of aspects of hip hop, and he is someone who is deliberately making sure he’s focusing on all the peoples that were a part of it,” She said.

While he emphasizes the musical contributions of people who have been ignored, Dr. Carson doesn’t see a perfect solution. As Dr. Brackett says, “Someone or something will always be left out.” Because of the reductive nature of constructing history, the reality is that it’s impossible to include everything. For this reason, Dr. Carson referred to the event as “a” hip hop history, not “the” hip hop history, to leave room for other narratives.

During the presentation, Dr. Carson took the audience through several different eras of hip hop. The first era was the Old School from 1978 to 1984. He defined each era to the audience by highlighting the most impactful artists and MCs from that time. In considering the nature of creating history, Dr. Carson acknowledged that the name of the second era, The Golden Age, is very subjective. He emphasized 1988 as the most important year of this era, mentioning the album ‘Straight Outta Compton’ by N.W.A. and the single, ‘Parents Just Don’t Understand’ by DJ Jazzy Jeff & The Fresh Prince. Rap Goes Mainstream from 1993-1999, and New Millennium Rap, from 2000-2010 follows.

While racism was not a focus of the presentation, the topic came up a few times throughout, particularly the systematic nature of racism in the U.S. On the topic, Dr. Carson said, “They say it runs on Dunkin ‘, but actually it runs on racism,” referring to Dunkin’ Donuts’ slogan, “America Runs on Dunkin’”, emphasizing how commonplace racism is in our country. It also demonstrates the endemic nature of racism, as the phrase ‘runs on,’ highlights an intent to uphold systems of white supremacy and privilege. The presentation acknowledged the reality of racism while keeping the focus on music, artistry, and the accomplishments of the Black community.

Wilson is also in Dr. Brackett’s AFAM 215 class, “On the Real: Black Popular Culture is Art.” As part of the weekend schedule, the class visited a hip-hop-focused exhibit and held two classroom sessions. Wilson appreciates the opportunity to learn outside the classroom, describing engaging with hip hop artifacts in-person as “a whole different level.”

Additionally, a small group participated in a listening session for Dr. Carson’s album on Saturday morning. “Dr. Carson actually said that this was the first time he’d sat and played his album start to finish for anyone. Certainly, what an honor for all of us listeners, and such a memorable experience to be a part of,” Dominic LaFratta, second-year, said. In addition to the listening session, Dr. Carson read the lyrics to an excerpt of his song, “073. Good Mourning, America” during the rotunda event.

The public event was sponsored by several on-campus organizations, including the School of Music and the Race and Pedagogy Institute (RPI). Along with Dr. Brackett, Aldrin Villahermosa and Anna Mondschean, RPI program coordinators, were crucial in bringing this vibrant event to The University. “He reached a lot of people. I’ve gotten a lot of great feedback about his visit. And he’s made a lot of people think,” Dr. Brackett said.

LaFratta, previously in Theater Professor, Wind Woods’ class that covered Dr. Carson, said in an interview, “After a fair bit of pushback, and certainly some induction, it’s a rare opportunity to observe the study of Hip Hop transition into academia, and especially fist bumps a significant character in its advancement.” Like Wilson, LaFratta found the weekend engaging and was glad for the opportunity to attend. Wilson summed up the weekend with these words: intellectual, exciting, and community.