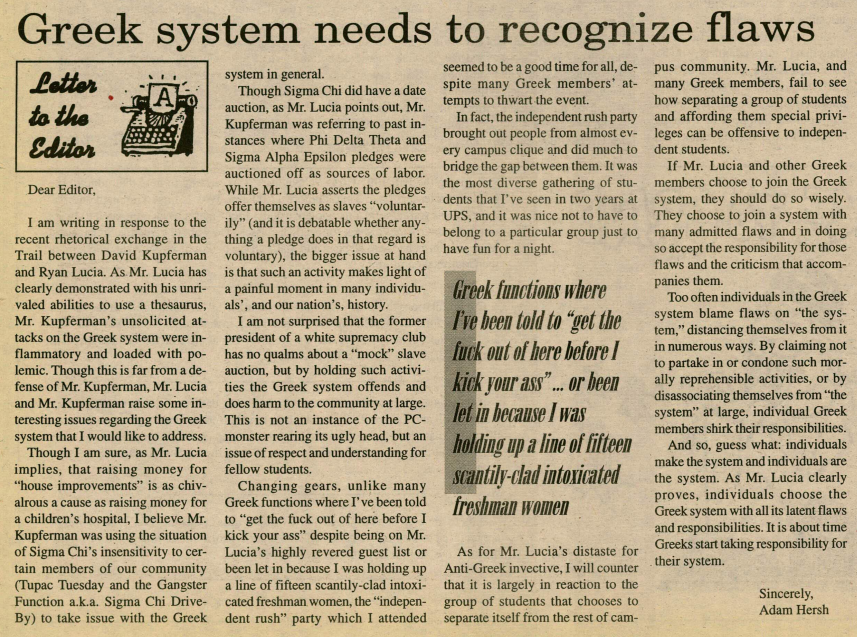 1997 Letter to the Editor on Greek Life https://soundideas.pugetsound.edu/cgi/viewcontent.cgi?article=2709&context=thetrail_all

The archives section of The Trail looks at recurring issues of importance on campus through the lens of past publications. One issue of recurring contention is the place the Greek system holds in our small liberal arts community. Movements like Abolish Greek Life (AGL) have recently refueled the fire of such conversations. The Instagram account published anonymous submissions of incidents involving Greek life witnessed or experienced by campus members that range from problematic to heinous.  The account’s most recent post is from April 28, 2021. Posts include mention of sexual assault and the protection of perpetrators through rape culture, racism, and an exclusionary hierarchy upheld through harmful gender stereotypes— the offenses goes on.

Diving into the archives proves that condemnations of Greek life have existed on our campus for longer than we may think. Conversations around anti-Greek sentiment are eerily similar to the past. These echoes prompt the question: What has changed in the past 25 years?

Below is the conclusion to a series of ‘Letters to the Editor’ from 1997 in which three students passionately argue about the place and problems of Greek life on campus. Adam Hersh’s letter entitled “Greek System Needs to Recognize Flaws” responds to two previous letters.

One letter by David Kupferman calls out blatant and horrifically racist Greek parties and themed events like “Tupac Tuesday and the Gangster Function, a.ka. Sigma Chi Drive-By”. Kupferman also references the auction of pledges for labor — an appalling, yet normalized, parallel to our country’s history of enslavement.

Another submission by Ryan Lucia discounts these accusations alongside extreme personal attacks against Kupferman. These letters are characteristic of a broader divide between ‘independents’ and ‘Greeks’ that was and, to a certain extent, remains filled with animosity.

Hersh further details Greek offenses and calls out the flimsy response to anti-Greek sentiment from the Greek community.

Through this exchange, we can reflect on the history of Greek life on our campus and further contextualize the recent stories shared via the AGL Instagram. Acknowledgment of such history can serve as a tool of evolution— however, as a member of Greek life myself, I know these conversations often come and go without tangible change. Whenever issues like those discussed by the Abolish Greek Life movement are brought up, the response often falls short with a feeble acknowledgment: ‘of course, we agree, that’s horrible, but….’

The exchanges from 1997 mirrored with those today are sickeningly similar. Evident stagnation garners the question: Are we stuck in an endless cycle of actionless discourse? Regardless, Hersh’s words still ring true: “Individuals choose the Greek system with all its latent flaws and responsibilities. It is about time Greeks start taking responsibility for their system.”