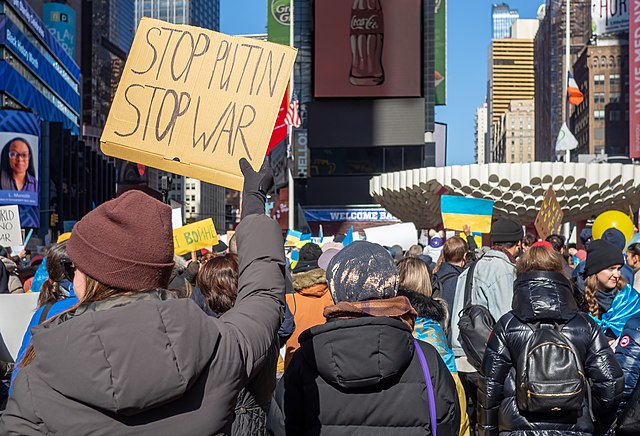 The rapidly developing Russo-Ukraine crisis began with the fall of the Union of Soviet Socialist Republics, or USSR. In 2014 Russia annexed Crimea, an area previously belonging to Ukraine, and this history erupted on Feb. 24 with Russia’s invasion of Ukraine. The ongoing armed conflict centers largely around Crimea and the Donbas and Luhansk regions of Ukraine. All three regions were a part of the, or USSR, until it dissolved in 1991. Russia largely still views the nations as part of its territory.

As of March 12, the United Nations recorded at least 579 Ukrainian civilian deaths and 1.5 million people have left the country. The death toll is likely much larger than what can currently be confirmed. In addition, Ukrainian President Volodymyr Zelenskyy declared martial law on Feb. 24th, banning all men between the ages of 18 through 60 from leaving the country. CNN recently ran a photo of a newly married couple holding hands and both holding guns. This conflict examines what warfare and territory mean in the 21st century.

University of Puget Sound Professor of History Benjamin Tromly, specializing in modern European and Russian history, spoke on potential frameworks for perspectives on conflict. The first framework views the crisis through Geopolitical tension between Russia and the United States. “Russia is trying to reassert itself as a great power”, Tromly noted.

In Tromly’s first framework, Russia is attempting to gain control of Ukraine to reassert itself as a power in relation to NATO and the U.S. NATO has expanded gradually to the east through the last few decades and promised Ukraine eventual admission to NATO in 2008. Ties to Russia portrayed the country as unstable and prevented the admittance of Ukraine into NATO.

Tromly’s second framework questions Russia’s relationship with Ukraine. Despite 32 years passing since Ukraine fell under  Russian domain, much of Russia still views Ukraine as a fragment of the USSR. Tromly noted that some Russians still consider Ukraine “part of our territory”, explaining that Poutin’s “ frame of reference is the 1970’s when the Soviet Union was this great empire. You know, Ukraine leaving the Russian orbit is just unimaginable.”

Tromly also noted a potential third framework to the situation. “Ukraine has been very flawed, but a democracy. There have been peaceful changes of power, people being voted out and replaced by their enemies. That hasn’t happened in Russia. Putin has been in power for 22 years.” It’s possible that Putin and Russia view Ukraine as a threat to their power simply in regard to its separate existence as a democratic state.

Putin states that his goals in Ukraine are “demilitarization and denazification”, but Tromly noted that it is important to not take Putin at his word. “It seems like maybe Putin would want to, you know, take the capital, put in a puppet government. But is that possible? I don’t think the Ukrainians want to live under Putin. Is Putin willing to cause the kind of bloodbath we’ve seen in Syria and elsewhere? I don’t know, it’s very hard to know. He obviously thinks he’s got to get something political out of this” Tromly said.

Tromley also remarked that invading Ukraine “is an incredibly risky move.” Already, Russia is facing massive sanctions from a multitude of countries including the European Union, the U.S. and Japan. The Moscow Stock Exchange closed Monday, February 28, stocks will remain frozen until Tuesday, March 8. The Russian ruble has dropped by about 30% as of March 4. Russia is losing significant amounts of money in the short-term, which furthers the questions of what Russia could potentially gain in the long term from this conflict.

Tromly noted that before the events of the last few days, Europeans largely thought that such a conflict would be impossible. The current crisis is the first time an European nation has attempted to change borders since 2014 when Russia annexed Crimea.

“I think it’s a big challenge to the international order, we’re turning to this broader historical moment of a Great Power competition: China, Russia, United States.” Tromly said. Although the crisis is in no means an American-Centric issue, It’s important to recognize that the American and Chinese powers may have played a large role in Russia’s decision to begin this invasion.

Tromly argues that this conflict in some ways is a test of current American Policy. “This prospect of a massive conflict, right on the borders of our allies is going to be very interesting for Americans’ understanding of their role in the world”.