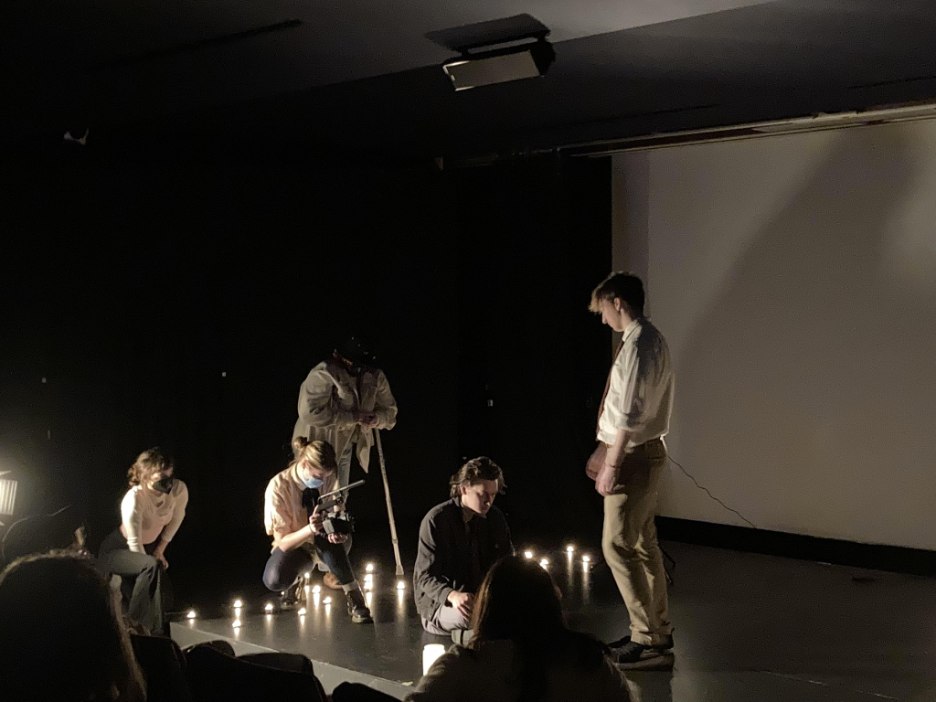 On February 12th, the University of Puget Sound’s film club undertook a daunting task: writing, filming and editing a short film, all in 96 hours. The ambitious project is for the Reel Life 96 film competition, an event held by the city of Lakewood, WA. “I wanted to jump on it as soon as I heard about it,” Jake Greenberg, fourth-year, President of the film club, said. The University team is competing with 31 other teams of up to 16 participants competing for prizes of up to 500 dollars.

The ‘weekend,’ (it’s actually four days total) started at 5pm on February 10th, when Greenberg received an email detailing the required elements, which are purposely withheld to make sure teams don’t try to get a head start. Each film must include one prop, action, and line of dialogue which isn’t announced till the start of the competition.

Before the 96 hours started, Greenberg predicted, “It’s gonna be a grind this weekend.” He was right.

I got to join the film club right as the required elements were announced and they started brainstorming for their five minute short film. The email announcement arrived at 5:00, and by 5:26 there were nine film club members brainstorming in a circle. As they threw out ideas and considerations, the energy in the room was eclectic. One student even bought a Pepsi from the nearby vending machine using solely quarters borrowed from other people. Although they were weary from the school week, they were animated in their discussion. Karen Hunt, fourth-year, Vice President of the film club, exclaimed, “Oh no!” as the gravity of the work ahead seemingly sunk in.

The three requirements were written on a whiteboard for pondering: the required prop was a lit candle, the action was dancing, and the line of dialogue: “Sometimes you have to be happy for what you don’t get.” There was widespread agreement that the line of dialogue was pretty corny. Ultimately, the group decided to focus on the story of love, movies, and the importance of showing up.

The script was completed Thursday night. As the group settled into the work, most of the filming took place in Rausch Auditorium and the lobby of Schneebeck Auditorium. The group remained masked throughout the process, with the exception of actors while they were actively being filmed.

Filming on Saturday didn’t go entirely smoothly. In an important candlelit scene, they forgot to turn on the mike and had to go back and re-record the audio. This added another task to the long list, but they made it happen.

The process was a sort of complex relay, with different people working on different aspects. There were 15 people involved, who worked on script writing, cinematography, editing, sound, lighting, acting, and other odds and ends. It was a chaotic and collaborative experience, in all the best ways.

Annika Freeling, first-year, mostly worked on script-writing. She said, “Specifically, I really enjoyed the process after we had established our basic idea and could come up with individual plot points and fun little details to add in.”

The finished film, centering around a love story, is sweet and hopeful. A couple, Joey (played by Greenberg) and Casey (played by Cormac Smith, third-year), run a movie theater together. Joey’s film is premiering in 30 minutes at the movie theater and they’re a nervous wreck. Everything is going wrong: the lights aren’t working, the popcorn machine is broken, and Joey worries that no one will come to the showing. On top of this, Casey is running late to help set up.

In the pivotal scene, Joey is in the theater, on the verge of a breakdown. Casey reassures them, and they end up dancing and eventually sharing a kiss. Once they return to the lobby, a crowd has accumulated outside! We learn that Casey was late because he spent all day putting up fliers.

The film was edited Sunday and Monday. The last step of the filmmaking process was driving a flash drive with the finished film to Lakewood on Monday afternoon. With that, the project was complete. The finished films will be viewed at a screening party on March 19th. Cormac Smith, an actor, said in reflection, “My favorite part was just being able to create something ambitious with people that I enjoy working with.”