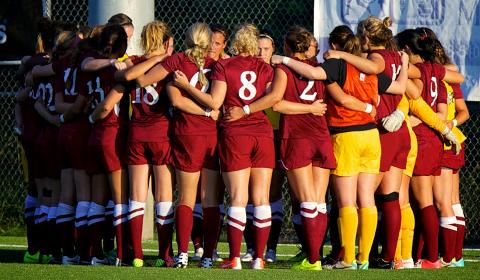 Whitworth and Puget Sound came into the game ranked first and second standings respectively.  The Loggers had improved their record 8-3-1 overall and 5-1 in Northwest Conference Play.

During the game against Whitman on Oct. 4, the Loggers opened up the scoring in the 10th minute.  Senior captain and midfield player Sean Ryan (Mill Creek, Wash.) buried his shot in the back of the net for his sixth goal of the year.

Ryan scored  a couple of yards outside the 18-yard box. Senior midfielder Conner LaFerriere (Tacoma, Wash.) was credited as the assist who passed Ryan the ball.

Whitman scored a goal in the 79th minute to cut the lead to 2-1. Junior midfielder Sam Zisette (Seattle, Wash.) scored another goal for Puget Sound in the 80th minute, increasing their lead to two goals.

“We are attacking players.  [The players] are executing at a high level right now,” coach Reece Olney said when asked about the team’s offensive success.

The Loggers took first place in conference standings with their win against Whitworth on Oct. 5.

Senior goalkeeper Nathan King (Preston, Wash.) is leading the league in goals-against with .72.  King has five shut-outs on the season.

The women’s soccer team lost to Whitman by a score of 1-0. Whitman scored in the 18th minute. The loggers finished with five shots and two shots on goal.

“I am looking to improve the offensive with runs and free kicks, and am continuing to work with my teammates to create as many goal scoring opportunities as possible,” Acorda-Fey said.

On Oct. 5 the women’s soccer team lost 1-0 again to Whitworth who scored in the second minute.  Puget Sound had 17 total shots in the game.

Coach Randy Hanson believes the team needs to work on its finishing.  The shots-per-game are frequent, but the conversation rate of shots-to-goals Hanson believes is below average.

The Loggers dropped to 6-3 in their season and 4-2 in conference. They are tied for fourth in league standings along with Linfield.

“We sort of fit into the boring sports cliché.  We don’t really have any win total or win goals or anything like that.  We more try to reach our potential and try to get better every day,” Hanson said.

Hanson has a firm belief that once a team starts focusing on winning, the team starts to take advantage of the process. The team’s emphasis is the process.  He stated the process is the work the team puts in during the off-season and practice.  If the team focuses on the little things, the wins will follow.

The women’s soccer team has won their conference 12 years in a row, but Hanson doesn’t talk about defending the conference title.

His only priority is getting the women’s team to play its best soccer game ever.

As of Oct. 5, Pacific Lutheran University’s women’s soccer team is first in the NWC.

The Loggers travel to PLU in Tacoma, Wash. on Oct. 29.

The men’s soccer team believe they can win a conference championship.

They have embraced the conference championship mindset.

After beating Whitworth on Oct. 5, the men’s team put themselves in very good position to win the conference title.

The men’s team plays Whitworth at home on Oct. 18.

They will also play Willamette at home on Oct. 26. Whitworth and Willamette are currently tied for second in league as of Oct. 5.