Horror movies to keep up the Halloween spirit

Halloween is the time of year when ghouls and ghosts come out to play and people don costumes in search of sweet treats. This is also the perfect time of year to attend haunted houses and watch the scariest movies. There are horror movies aplenty and with so many to choose from, it can sometimes be hard to decide which to watch. Though the holiday is past, here are a couple of ideas to keep the Halloween season frightful and fun.

Number 1: Scooby Doo and the Ghoul School (1988). Shaggy, Scooby Doo and his nephew Scrappy Doo are hired as gym teachers at Miss Grimwood’s Finishing School for Girls and when they arrive, they are greeted with a surprise that Scooby and Shaggy find rather unpleasant—the girls are in fact monsters. While slightly scarier than Hocus Pocus, this Scooby Doo film is very entertaining.

Number 2: Hocus Pocus (1993). Starring Bette Midler, Sarah Jessica Parker, and Kathy Najimy as three sisters from the Salem Witch Trial era the film follows them on Halloween night. The comedy shows the playful spirit of Halloween. It is altogether a fantastic movie for those who love Halloween but do not love scary movies.

Number 3: Monster House (2006). This animated movie stars Steve Buscemi, Mitchell Musso and several other stars playing smaller roles. The movie is about a house across the street from DJ Harvard which becomes animated and tries to eat everything that comes onto its property—including the children trick-or-treating on Halloween. It is frightfully fun for everyone.

Number 1: Halloween (1978). A classic of the genre, the film was made during the prime time for slasher horror movies. John Carpenter, a well known name in the genre, directed the movie,which stars Jamie Lee Curtis and Tony Moran as the killer Michael Myers. After Myers was institutionalized as a child, he escapes and goes on a killing spree, targeting Jamie Lee Curtis’ character and her friends.

Number 2: The Texas Chain Saw Massacre (1974). With a tiny budget compared to most big Hollywood horror movies, this film focuses on the creepy and terrifying tale of Leatherface and his chain saw murders. After discovering that her grandfather’s grave had been vandalized, Sally and four other young adults head to rural Texas only to be caught in the web of a family of murderous cannibals. It is a classic, and will teach the viewer in the most gruesome way the dangers of picking up hitchhikers.

Number 3: A Nightmare on Elm Street (1984). Directed by a horror legend, Wes Craven, and starring Johnny Depp in his first movie role and Robert Englund as the Springwood Slasher—Freddy Krueger—this film focuses on Freddy and his infamous knife-hands. After tormenting a group of teenagers in their sleep, he kills them one by one in the most terrifying ways.  The last teenager, terrified and unwilling or unable to sleep, must find a way to stop Freddy and save herself.

Number 1: The Conjuring (2013). By far the most terrifying horror movie of recent years, this movie tells the “true story” of two demonologists, Ed and Lorraine Warren,  as they battle a supernatural force living in a family’s farmhouse. The film will leave you scared even after the credits have rolled. It will have you jumping in your seat. This movie is perfect for the paranormal fan and the horror lover. Campus Films will be presenting The Conjuring from Nov. 1 through 3 in Rausch Auditorium.

Number 2: The Exorcist (1973). Commonly regarded as one of the seminal horror movies, this film tells the story of a young girl possessed by an evil entity. The mother of the child seeks the help of priests to help rid her child of the demon within her. With fantastic makeup and special effects (even given that it was made in the 70s), the film’s imagery has a significant staying power with its viewers.

Number 3: The Evil Dead (1981/2013). Also considered to be a classic, and recently remade, The Evil Dead tells the story of a group of young adults who find a creepy book during their stay at a cabin in the woods. They unwittingly release the book’s evil, which results in several horrifying situations. Some scenes are psychologically disturbing and for the most part, the film is also very gory. The original and the remake are both fantastic examples of well-done psychological thrillers in the horror genre.

Number 1: Nosferatu (1929). Although the film has a slow start, this silent movie is considered to be one of the very first horror movies that started the vampire craze. Based on Bram Stoker’s Dracula, it follows the evil doings of Count Orlok. Although it is a silent film, the dramatic score and makeup were ahead of their time, which makes this movie well worth sitting through the slow build.

Number 2: Dracula (1931). Starring Bela Lugosi as Dracula (a horror star in the early years of the film industry), this movie is also based on Bram Stoker’s Dracula. After traveling to England, Dracula takes a liking to Mina, whom he then stalks. This film is one of the most famous and well-made of the many adaptations of Stoker’s novel.

Number 3: The Wolf Man (1941). Also starring Bela Lugosi as Bela, a werewolf, and Lon Chaney Jr. as the main character, this film shows the talent of early horror filmmakers and makeup artists. After saving a girl from a werewolf attack, a young man is himself bitten. To his disbelief, he transforms into a werewolf as well. 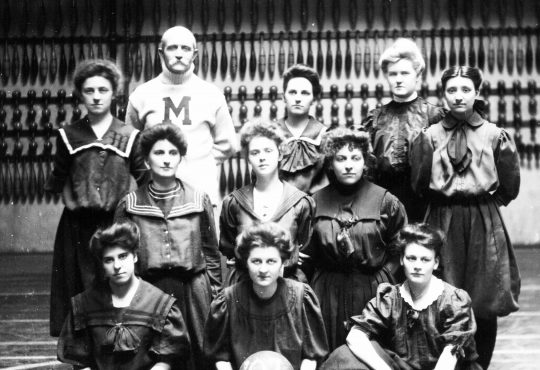