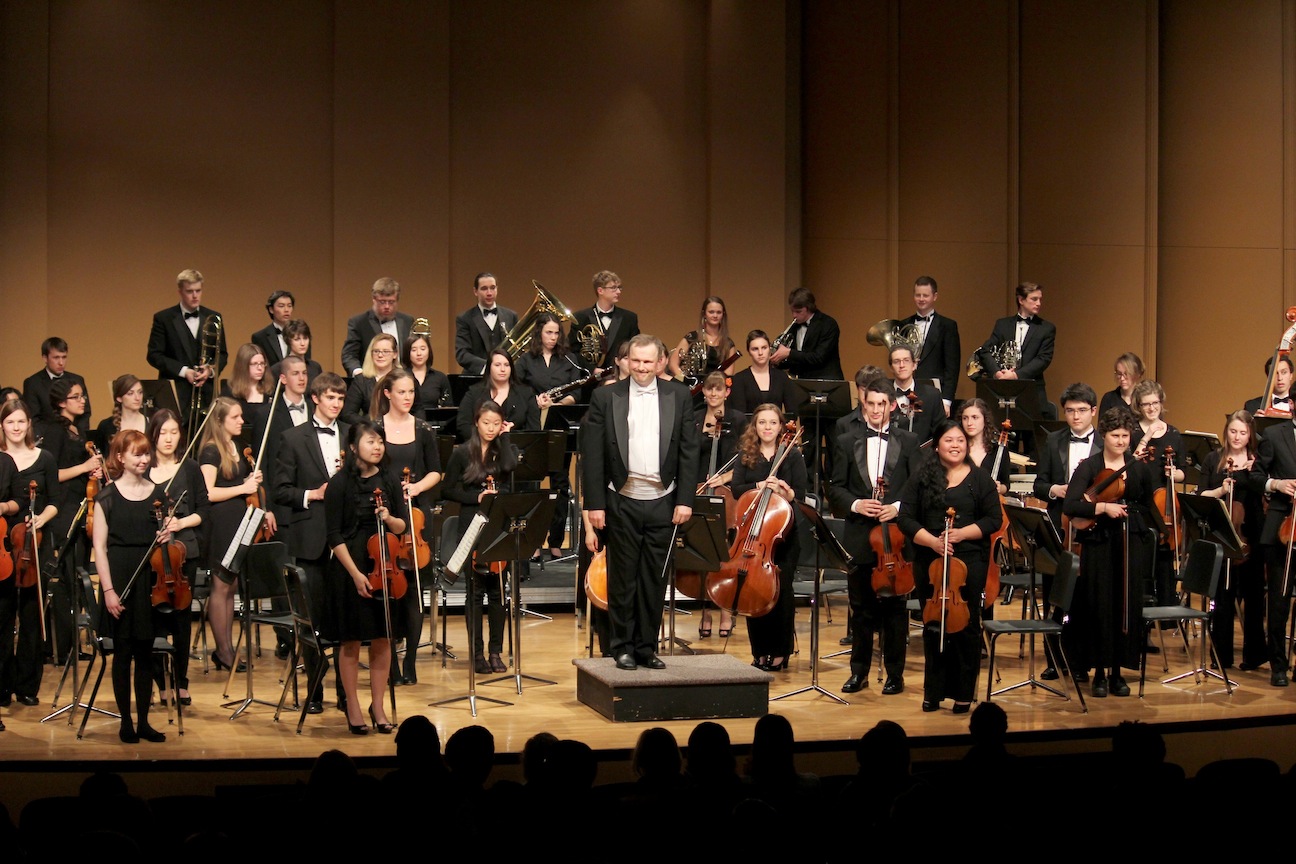 The University of Puget Sound’s Symphony Orchestra concluded its performances for the school year with the “Friendship and Fraternity” concert.
The three pieces played were the prelude to the opera The Mastersingers of Nuremberg by Richard Wagner, two movements of Clarinet Concerto by Aaron Copland and Variations on an Original Theme, Opus 36 (“Enigma”) by Edward Elgar.
The opera The Mastersingers of Nuremberg, which Wagner first began writing in 1845 and finished in 1862, is a comedy, the only one Wagner wrote.
Wagner wrote the prelude to the opera in the final year of its composition, 1862. It is grand and stately, like much of Wagner’s music, and served as an appropriate beginning piece to the concert.
The Clarinet Concert by Copland takes a different turn from Wagner, beginning as a slow and expressive piece that is interrupted by a cadenza, in which the solo clarinetist played a showy and impressive solo part for several bars. The piece also included a harp, played by sophomore Lauren Eklund.
This piece was composed upon commission from clarinetist Benny Goodman in 1947. Copland commented on the piece that the first theme is “in a languid song form,” and that the second is “a contrast in style—stark, severe, and jazzy.”
The final piece, Enigma Variations by Elgar, consists of 14 variations on a theme. The 14 variations are meant to represent 14 people: 12 of his friends, his wife, and himself for the final variation.
“[The piece] represents the loneliness of the creative artist,” Elgar said of the piece when it came out.
The “enigma” of the piece lies partially in the fact that the only way to determine to whom the variations are attributed is by the initials. For example, the first variation is about a C.A.E., later revealed to be Caroline Alice Edgar.
Most of the people connected to each variation have been discovered, except for variation 13. This passionate variation, called Romanza, is believed to represent Lady Mary Lygon, although she was no more than a friend to Elgar. Director Huw Edwards believes that the variation is actually about Helen Jessie Weaver, a woman to whom Elgar was engaged for nine months before she broke it off and moved to New Zealand.
Edwards, who conducted the concert, is the new Puget Sound director of orchestral activities. During the middle of the concert, he commented on how he felt a strong connection to the orchestra only after a year of teaching. He also drew attention to the graduating seniors in the symphony orchestra, for which this would be their last concert.
The concert was both brilliantly and wonderfully satisfying as an ending. It closed off a final year for the seniors, the first of hopefully many years to come for Edwards and, overall, another successful year for the symphony orchestra.