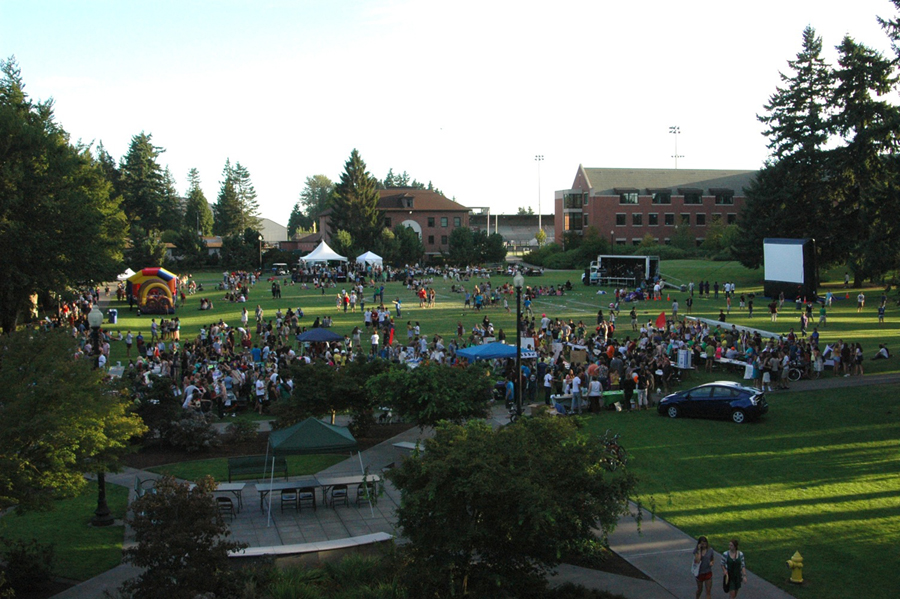 LogJam is a University of Puget Sound exclusive annual festival that had its ninth event on September 3rd, 2010. Nearly all clubs, sports, organizations and various departments were represented at their respective tables, giving new as well as current students an opportunity to sign up for extra-curricular activities. A barbecue was provided by Dining and Conferences Services and spectators enjoyed live performances from The Blues Power Review featuring the New Blues Brothers, fire dancers from Spinergy Arts, the Ande Marimba Band, Garden Level and I Know What She Said. KidJam activities included a balloon artist, inflatable houses, arts & crafts and games. During the event, a helicopter dropped numbered ping pong balls on students inside of the “P” and “S” letters on Todd Field. Depending on which number was on the ball, students could exchange them for  specific prizes, including vinyl  records. After LogJam, the movie Toy Story 3 was shown at Todd Field. All day, students took advantage of the Bookstore’s ten percent discount on Puget Sound merchandise, and the first two hundred people there popped maroon balloons to win prizes.

This year’s new clubs include Camp Games Club, which partakes in popular camp games like Big Booty and Ninja. The Circus Club, which hopes to participate in activites like fire dancing and contortion, is currently undergoing a risk review, but it was actually founded several years ago. Similarly, the Long Board Club just passed a liability review and is now official. The Drum Circle Club and Puget Sound Dental Club are newcomers, but by far, the most popular new club this year is the Club That Goes to Other Clubs. Nearly 300 people signed up for the opportunity to participate in the events and activites of other campus clubs.