The Trail
HomeFeaturesBottlecap bluegrass a hit at Metronome
Features

Bottlecap bluegrass a hit at Metronome 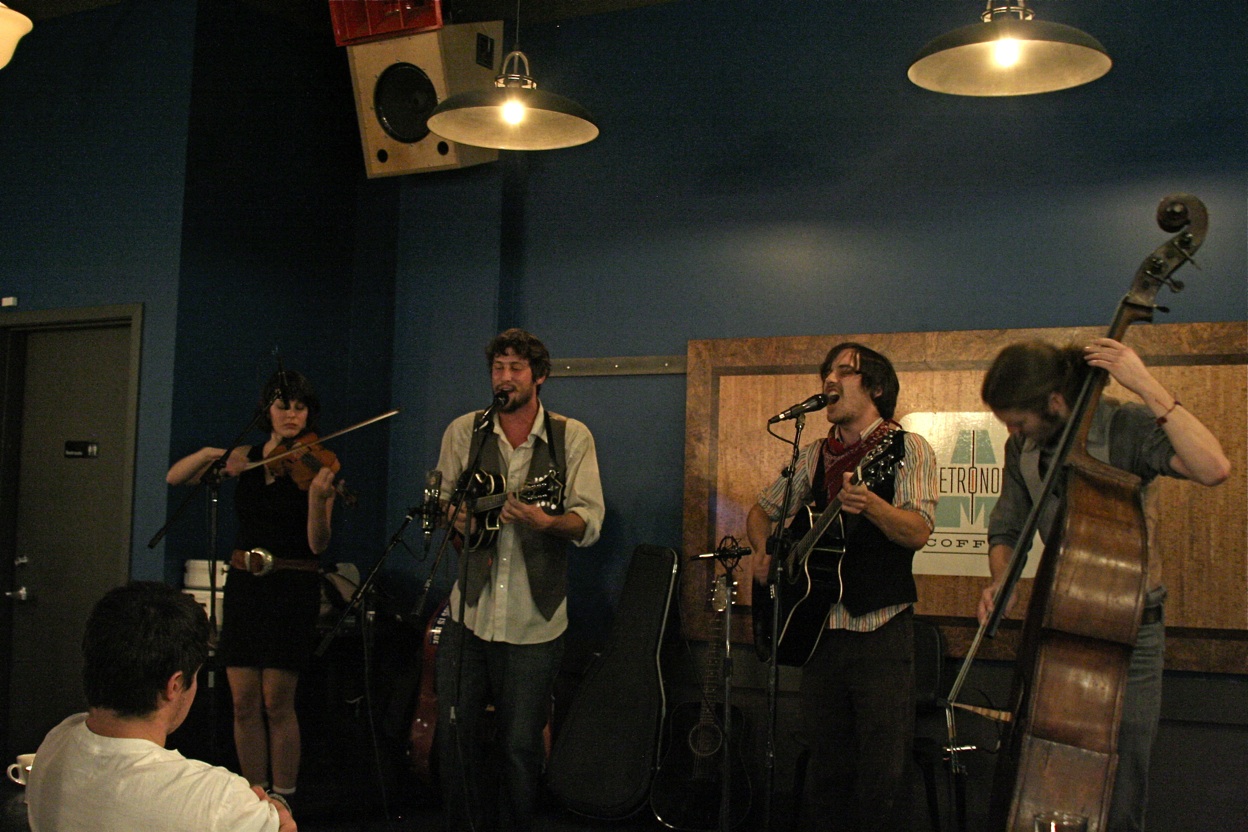 Bluegrass outfit The Bottle Cap Boys played to an appreciative house of current Puget Sound students, alums, and the neighborhood crowd at Metronome Coffee on Nov. 9.
The band, a four-piece composed of Ross Becker on mandolin, Luke Borsten on guitar, Mike Raley on upright bass, and recent addition Amelia Thornton on violin, is currently on tour around the Pacific Northwest. Vocals were mostly the responsibility of Becker and Borsten, with occasional harmonizing by Thornton. All three vocalists are Puget Sound alums, and the band’s website notes that Becker and Borsten began playing together on their first week of school at UPS.
I arrived at 8:15, just in time to catch the end of opener Micaela Cooley’s cello set.  Some of the audience had paid the $3 cover just for the pleasure of seeing Cooley’s heartfelt solo act, and even the final number was worth it– I regretted not arriving earlier.
After a quick “What up, Tacoma kids?” the band launched directly into a lively set which lived up to their boot-stomping reputation. The band members bill themselves as “pure, insatiable energy guaranteed to lift your spirits,” and they delivered.
By the third song of the set, “Secret Sunshine,” things got rambunctious, complete with yips, howls, and a lively mandolin breakdown.
One of the band’s slower numbers inspired some shirtless flailing by a particularly inspired member of the audience, leading Metronome staff to mouth “Who’s this weirdo?” The band was largely unperturbed, and finished off the song to vigorous applause for the performance and the interpretive involvement.
I later found out that the band had challenged audience members to a dance-off, with a free album as the prize. I assume the sole participant was declared winner by default. Towards the end of the set, most of the front row was on their feet to dance and clap along in the limited dancing space.(This little incident was in response to the band saying that the winner of a dance-off would win their album… but he was the only one who did it…)
An occasional twist toward the melancholy wasn’t out of the repertoire, with Thornton’s voice and violin offering a nice leveling influence to the lively hollering of Becker and Borsten. As much fun as the faster numbers were, I found the band at their best while in lonely and heartfelt harmony. Lyrics that might seem corny or overwrought in isolation, lyrics like, “you are still painting the walls of my dreams,” sat earnestly in counterpoint to more playful songs.
The Bottle Cap Boys’ local roots helped out in engaging what might’ve been a subdued coffee-shop crowd, but the music held all the timeless elements of great bluegrass – heart, harmony, and, as the band’s own website puts it,  “the freedom and vastness of middle America.”