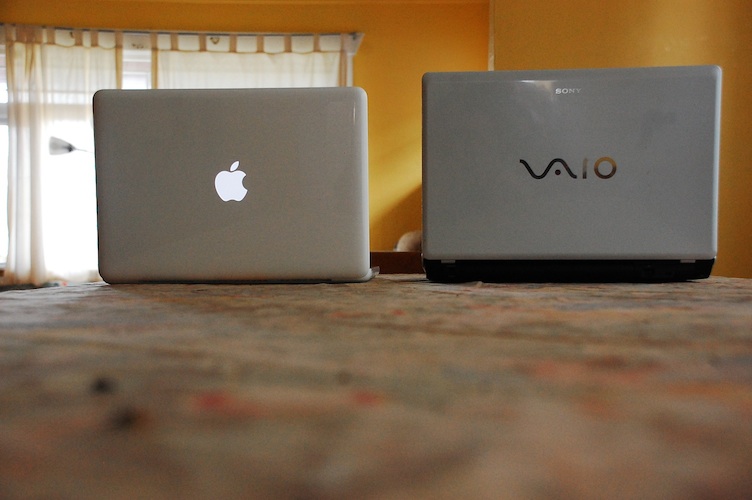 It’s a popular, and sometimes contentious, issue on college campuses around the country. Macs or PCs?

The Mac craze has been sweeping colleges across the nation. In almost any trendy coffee house you enter, you’re bound to see someone sipping on a latte, in Birkenstocks, working on a Mac.

Macs are overrated and not worth the money.

The first and most obvious reason the Mac craze is overrated are the ridiculously high price tags of the laptops. If you want a Mac you will spend at least $999 (Macbook) and could spend as much as $2499 (Macbook Pro 17 inch). Some PCs can cost up $2000, but a majority of laptop PCs are between $400 and $500.

It is not the computer’s job to protect the user when the user is engaging in questionable internet habits. Security is excellent on PCs for users who surf the web responsibly.

PCs are expected to last three to five years with one “checkup” which can cost up to $50, and one replacement power cord which can be purchased online for $15. Taking a median price of $450 a PC is expected to cost approximately $615 over four years, or $153.75 a year.

Macs, as well as the power cords and other accessories, are expected to last between five and eight years. The median price of a Mac is $1,700 and will last for six years, or $283.33 a year. Even the least expensive Mac model works out to $166.50 a year.

One Mac computer might last longer than one PC, but owning two PCs is still cheaper than one Mac. Macs may look nice, but so does the money you save when buying one, or even two, PCs.

I like having the ability to right click. I can copy and paste, look up synonyms or change the font with the click of a button right out of the box. I am not able to do those things on a Mac.

The free software is another bonus for PC users. Citing the long tenure of Windows, download.com gives users the selection of 55,000 packages of Windows freeware. Mac users have a selection of only 4,586 freeware programs.

PCs also offer a wide variety of models and manufacturers. Consumers can choose from operating systems made by Dell, Lenovo, Samsung, Gateway, HP and Sony. Mac computers offer you three choices, and the Macbook Air feels like I could break it in half by looking at it.

While protecting the environment isn’t often associated with PC laptops, PCs are actually “greener” than their Mac counterparts. Apple is currently near the bottom of Greenpeace’s Green Electronics Guide. Greenpeace claims that the company “scores badly on almost all criteria,” including the use of hazardous chemicals and recycling.

I must admit that Macs are probably better for some things. Any form of graphic design is much easier to create on a Mac. The audio and visual editing is preferred by experts. The design of Mac computers looks nice and is trendy.

But many of those features that are so great on a Mac are just as great on a PC. You can still edit pictures, music and videos on a PC. You just don’t look quite as cool doing it.

If you like saving money, free software, the right click button, a wide variety of options and doing comparatively less damage to the environment, PCs are for you. The hype surrounding Mac computers is nothing but a trend that is hurting the consumers by leading them into a choice they do not want to make.