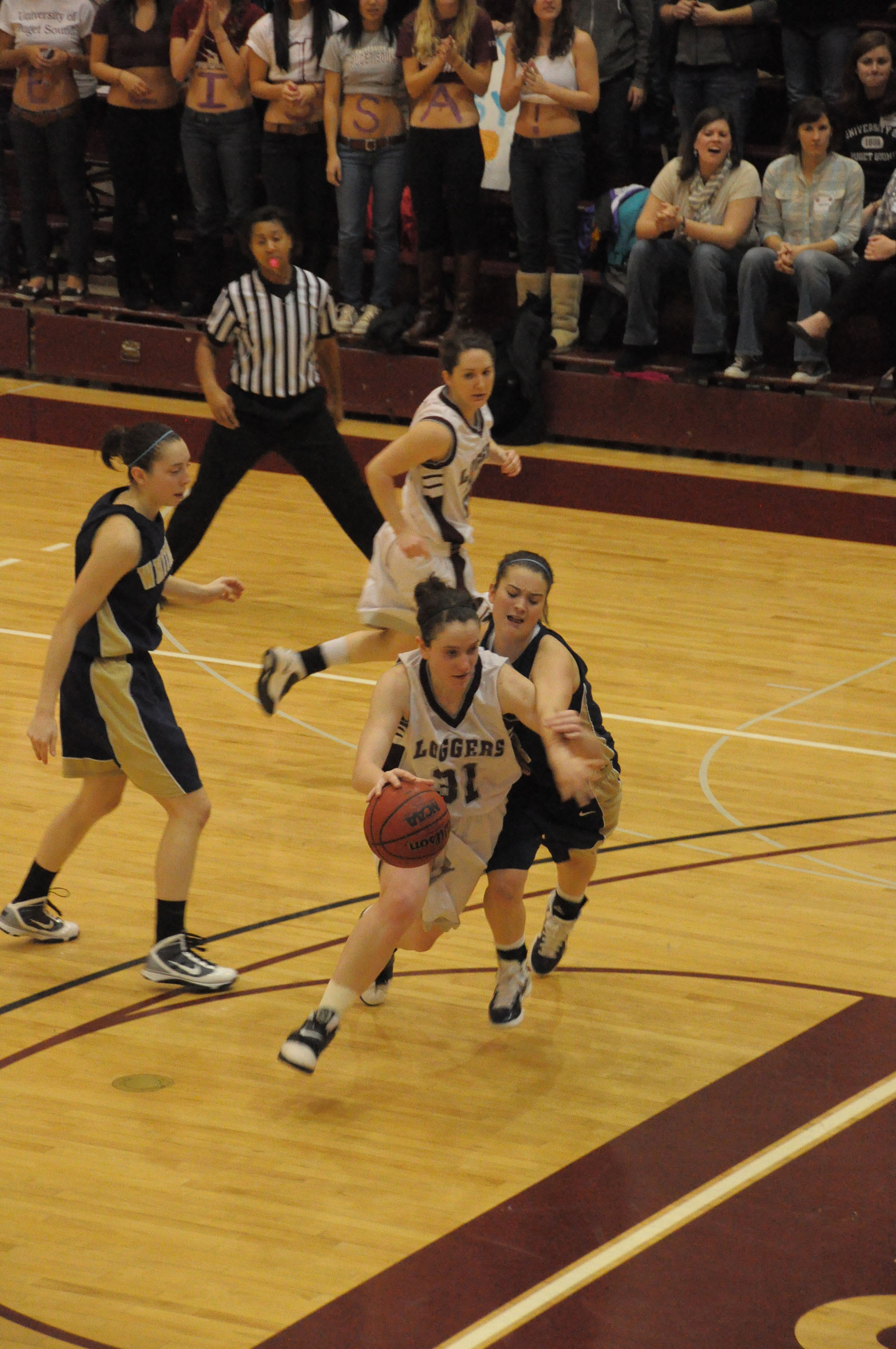 The roaring crowd caused a deafening din in the Field House Saturday night as the Loggers pressured Whitman into overtime. The Loggers needed the extra point to take the lead and the win. With 0.2 seconds remaining junior Jocelyn Riordan (Lake Forest Park, Wash.) knocked down two free throws shutting down Whitman’s comeback.

“We had two very intense wins in overtime this weekend, and after those games we all came together knowing we did our absolute best to win. We are all excited for the rest of our practices and games. We are going to push one another to be the best we can be. We only have a few games guaranteed left, and we all are going to give one hundred percent to succeed as a team,” freshman Melissa Cachopo (Morgan Hill, Calif) said.

On Friday, the Loggers played host to the Whitworth Pirates. It was a back and forth battle but the Loggers pulled out a 69-60 victory. The game went to overtime with the Loggers surging away from the Pirates by scoring the first nine points of the overtime period.

Whitworth showed great potential, hitting a big shot at the beginning and gaining momentum by the end of the regulation period. It was during the five minute overtime period where the Loggers slowed down and began to execute beautifully. This allowed for the Loggers to take control of the court and drive Whitworth to a standstill.

Saturday’s game also ended in overtime, with the Loggers taking an 81-78 victory over Whitman.  Although the Loggers took an early lead, they were unable to hold off Whitman.

The first half of the game was a back-and-forth battle with five lead changes and three ties.  In the second half of the game, the Loggers regained momentum with Riordan leading the team to a 12 point lead.

The game was eventually tied, forcing the team into overtime, but the Loggers opened the extra frame with a bucket by Riordan. On the next possession, freshman Taylor Jones (Keizer, Ore.) made an important three pointer that put the Loggers ahead 67-62. The gap was closed by Whitman with just three seconds left, but Riordan shut out Whitman by knocking down two free throws.

Saturday’s game also marked a momentous event for the basketball team. It was during this particular game that Riordan made her 1,000 career point, a great accomplishment in the world of college basketball.  Sadly it was not announced at the time that Riordan eclipsed the marker but it can be assured that her great accomplishment will not be forgotten and will be celebrated.

“I actually didn’t even know it was my 1,000th point when I scored it. It was on a free throw in overtime, but with the game so close no one even acknowledged it. I was just glad I could make the free throw to keep my team ahead and eventually get the win. It is such an honor to have scored 1,000 points in my career and it’s a great milestone, but my focus is on our next few games and trying to help my team make the National tournament,” Riordan said.

The Loggers will be back in action on Tuesday, Feb. 8 when PLU visits the Field House.