Empire of Venus: a narrative on ancient abuse 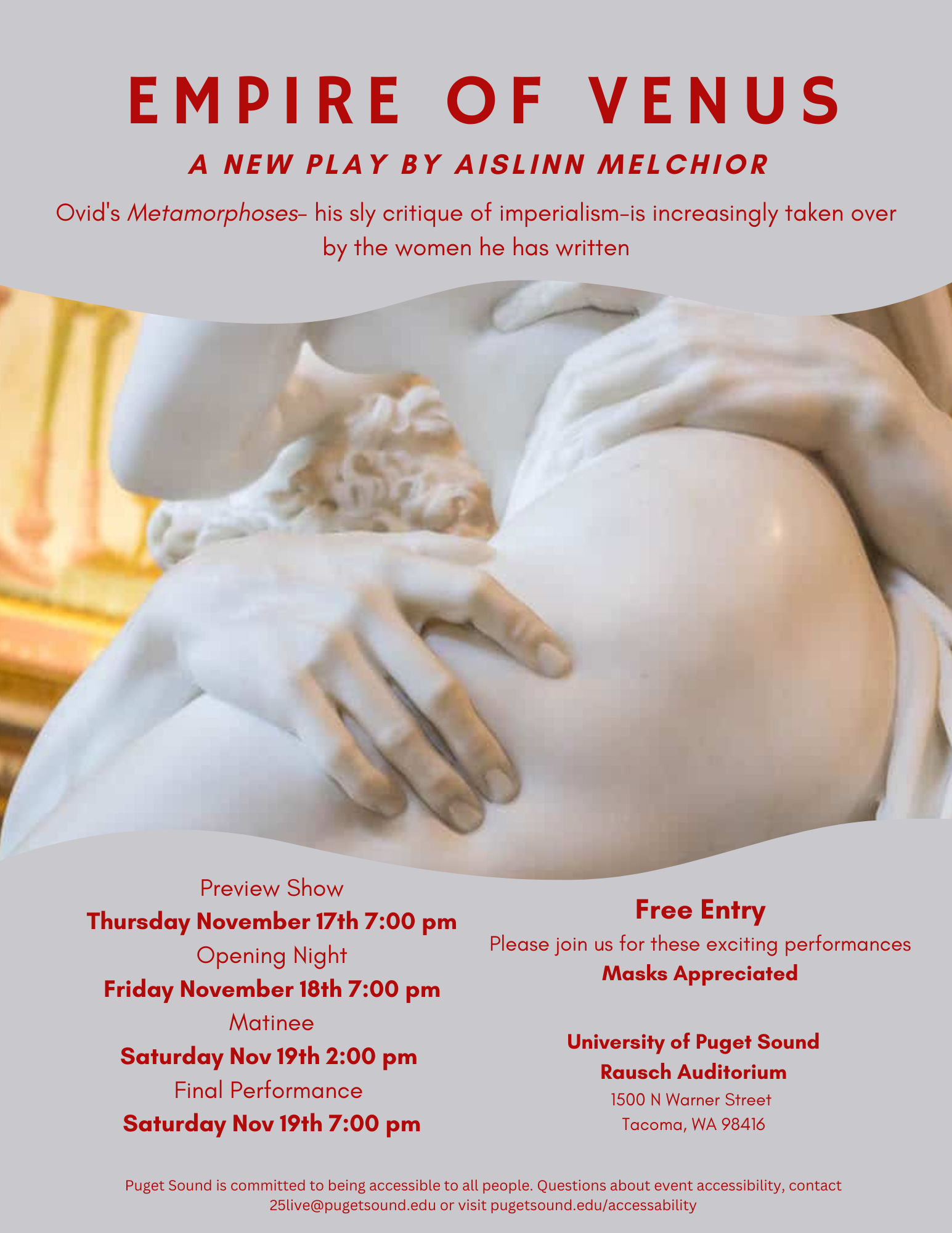 “Empire of Venus” is a new play written by University of Puget Sound’s own Greek, Latin & Ancient Mediterranean professor Aislinn Melchior. This production was a staged reading: the actors had scripts in hand and there was only rudimentary stage direction. This reading promises great things for a full production at a later date. “Empire of Venus” is based on Ovid’s Metamorphoses which is a collection of unrelated short stories about ancient myths and legends. Empire of Venus is a retelling of many of these stories. However, Dr. Melchior turned the focus away from the male protagonists and onto the women they interact with in their stories. “It is about the women in the Metamorphoses reclaiming their voices and some who even take revenge,” Dr. Melchior says.

Due to the subject matter of the stories themselves, with the women often subject to abuse, this is not a production to be taken lightly. The play features the discussion of rape and sexual assault in the ancient Greco-Roman world. Each scene covers the abuse of women in the context of one of Ovid’s stories. One audience member remarked after the production that she wished there had been better content warnings given as it is often hard to appreciate the rest of the play when blindsided with heavy subject matter.

On stage, a brief synopsis of the original story was given to fill in the gaps for those who may not know the original tale. This was followed by the mic being handed to the women, giving them a voice that is left out of Ovid’s writings.

With only five actors on stage and only two weeks of rehearsals behind them, the story felt disjointed at times, with very little continuity between scenes other than the general theme. It is unclear if this is an obstacle that would be overcome with more revision and workshopping, or if this is due to the fragmentary nature of the script and the fact that edits were being made so close to production. This separation of scenes may be true to the Ovidian story, but it can feel out of place on stage. While this was noticeable, it did not detract from the scenes themselves.

Despite the short timeline, the actors had many of their lines memorized. Their committed preparation – including the memorization of long soliloquies – brought Dr. Melchior’s script to life. The monologues were interspersed with deadpan humor that mirrors Ovid’s own proclivity for puns and wordplay. Dr. Melchior’s wordsmithing features modern language, elegantly stitched together into speeches that brought tears to the eyes of actors and audience alike.

The playbill included a page to write out any “painful or burdensome memories” that may be brought up. At the end of the play, the actors and characters alike invited the audience to drop their pages of thoughts into the ‘river’ on stage, where they would be swept away. Dr. Melchior assured the audience as lights came up that she would be burning the notes as a final act of release. In writing this play, Dr. Melchior hoped to create a story that forces catharsis for the audience.