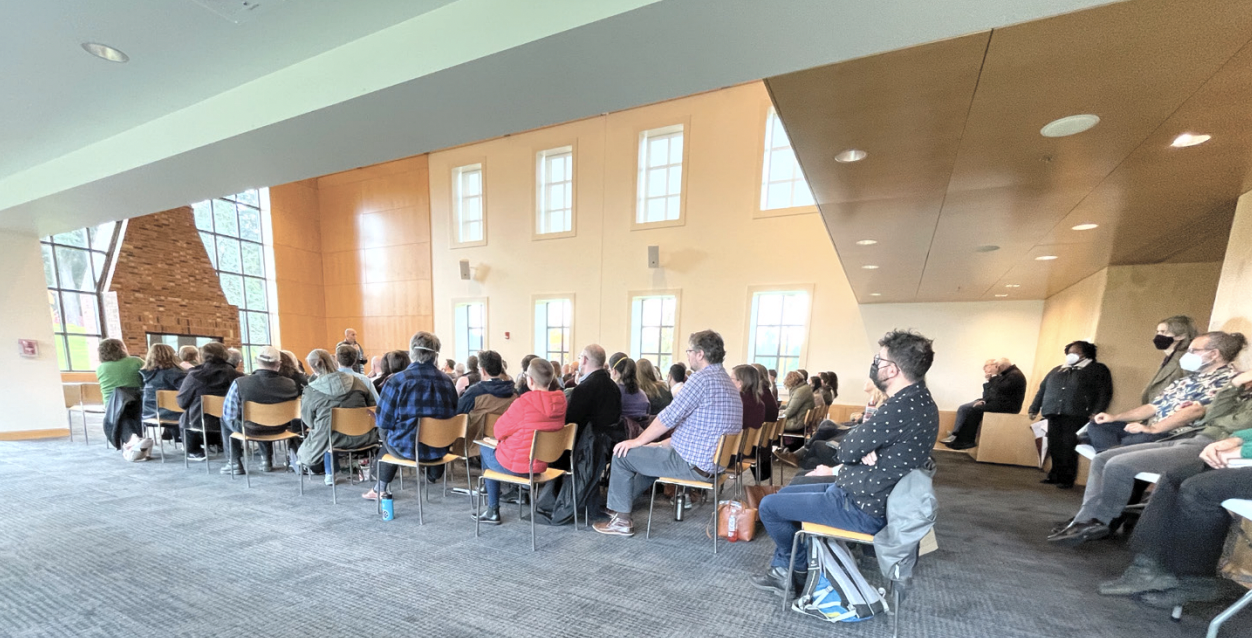 At the monthly faculty meeting in the Tahoma Room on Nov. 2, faculty unanimously passed a resolution urging President Crawford to share the full report and related documents laying out evidence for the President’s recommendations to the Board of Trustees in October. The meeting also highlighted the stark divide between the faculty and the University’s administration due to a perceived lack of transparency by the administration. These heightened tensions are due to potential cuts caused by the University’s poor financial situation.

Many faculty members voiced deep frustrations at the lack of transparency from the administration regarding the recommendations made to the Board and the process that went into them.

“There is a perception that the process was not done in good faith,” said Seth Weinberger, a Politics and Government professor.

Interim Provost Nick Kontogeorgopoulos, who attended the meeting, assured faculty that he believes the administration is acting with the best interests of the entire University in mind and that the decisions of the Board do not reflect a separate process between the President and the Board of Trustees.

Kontogeorgopoulos told the faculty that although program discontinuation is a real possibility in the near future, there is as of yet no plan as to which – if any – programs would be discontinued or subject to cuts. He explained that the decisions related to program discontinuations are highly dependent on retirements and reduction of contingent faculty. He also voiced his personal belief that no cuts should be made beyond those absolutely necessary.

The resolution passed at the faculty meeting was not passed with the expectation that the President would comply with their request, but rather to show “a coordinated move of solidarity by the faculty,” as one professor put it.

A statement released to The Trail via email by four professors after the faculty meeting indicated their disapproval of the President’s alternative plan, and the differences between the Academic, Administrative, and Auxiliary Program Review (AAAPR) and his plan. “The AAAPRC recommended that those cuts be made mostly through retirement attrition, rather than through program elimination, which the President’s alternative plan proposes,” the statement said.

Professors at the meeting noted that the President’s plan included an additional three million dollars recouped through increased enrollment, without an explanation of where the projected increase in enrollment came from, something the AAAPRC was not allowed to do.

They also emphasized that they feel like they are taking the brunt of the consequences for problems they did not cause. They rejected the framing of the deficit as a faculty problem, pointing out that the University’s failure to reach enrollment goals in recent years is not the faculty’s fault, yet they are the ones at risk of losing their jobs. The statement released by faculty members noted that the AAAPRC suggestion to eliminate faculty positions was a reflection of the fact that they were not allowed to explore other means of closing the deficit such as evaluating the structure and pay of high-level administrative positions.

President Crawford did not attend the faculty meeting, which offended some of the professors hoping for transparent communication with him. They mentioned that instead of supplying the faculty with the documents and data they asked for, he pointed them to his email and the community town hall on November 16.