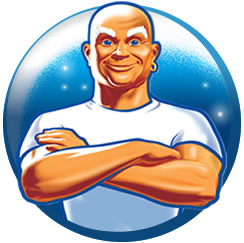 Everyone knows I’m an all purpose cleaner, I’m great on grease and I have a magic eraser. However, not many people know that I’ve got a magic pencil, too. That is to say, I’m a writer. I’m also related to Ghandi (spiritually) and take responsiblity for not only the cleanliness of your house, but also the cleanliness of your behavior. Now, don’t tell your mother any of this. If she thought I didn’t trust the job she did raising you, she’d stop buying my products, then I would have to sell my speedboats and get rid of my gym membership, and my much-younger boyfriend, Saul, would probably leave me. He’s a photographer. He looks great in a tank top.

In today’s lesson you will learn how to follow your impulse to be impatient and rude while sounding polite! Take the following situations:

1.)  A teacher is actively lecturing.

Rude Situation: Interrupting the teacher by yelling “Shut UP!”

Polite way of being rude: A student raises his hand until called on, then states, “Excuse me… But could you please just stop talking.” (Not only does he quiet the teacher, the teacher’s own competence is questioned. In all, very harsh.)

2.) A girl is breaking up with her boyfriend because he has added his freshman fifteen and then some.

Rude Situation: “You’ve gotten fat. I’m breaking up with you.”

Polite Situation: “Your personality has been carrying this relationship for the last month. It’s just not enough to carry the new burden.”

3.) A drunk college student accidentally misdials a random house at one in the morning.

Rude Reaction: The man calls the student an irresponsible loon and yells himself back into a sleepy stupor.

Polite Reaction: The man asks for who the student is trying to reach, then calls him back every fifteen minutes for the next eight hours and relates to the student potential “matches” he has found for the intended call.

4.) Two bros are showing each other their new hot tunes. One is not a particular fan of his taste.

5.) An art critic bringing down a failing artist.

Rude: “This art is terrible.”

Polite: “We should submit this to a modern art gallery.”

…I guess in telling you all this, I’m trying to say, you don’t really ever need to say what you mean. If what you want to say is cruel and hurtful, then you can say it nicely, and make someone feel terribble while feeling good abut yourself. It’s like Saul always tells me, “You keep this house so clean sometimes I feel like I’m losing my mind, like I’m in an insane asylum.”