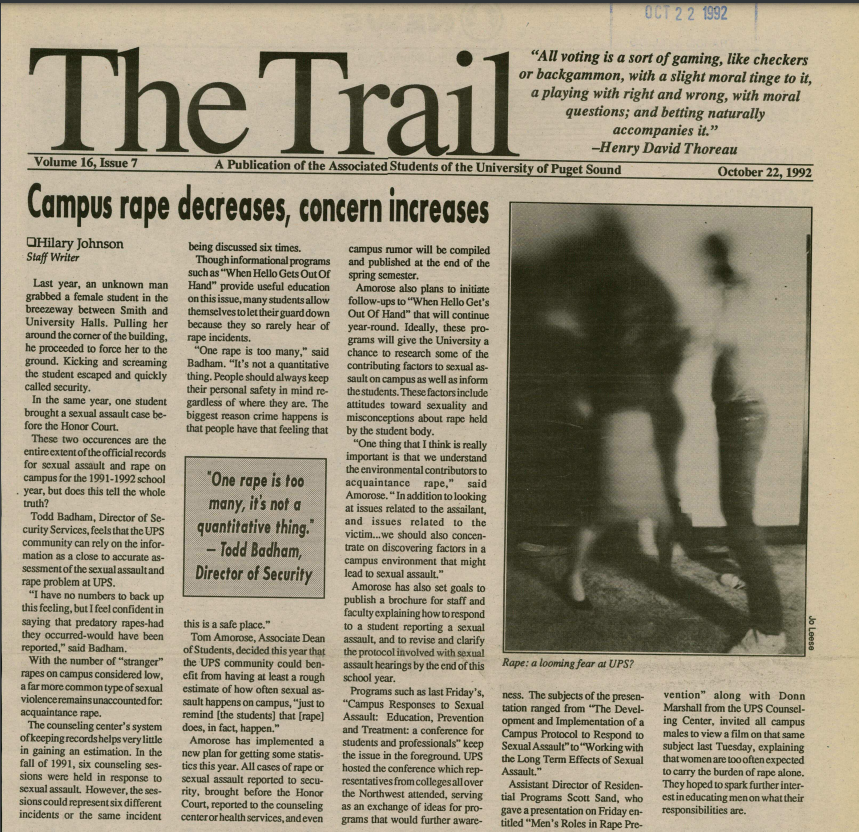 The Archives returns this month with an article that woefully contextualizes the community’s ongoing ignorance towards sexual violence. While the featured 1992 article provides an expository insight of the University’s history and marks the need for continued conversation, this piece does explore triggering content. Resources for students and community members are outlined below.

Picture the 90s, thirty years ago and an era when our campus reportedly witnessed a mere two incidents of sexual assault. Todd Badham, Director of Security on campus since 1984, noted in the fifth paragraph of the 1992 publication, “I have no numbers to back it up, but I feel confident in saying that predatory rapes- had they occurred- would have been reported.” … Hmm, as opposed to all the unpredatory rape? While this statement is toxic on its own, a more important takeaway is the unfortunate and tangible reality that the majority of rapes go unreported–more than two-thirds according to RAINN (Rape, Abuse & Incest National Network). The dated yet predictable narrative that low reporting indicates a low cause for concern is increasingly frustrating considering collegiate administrative histories of turning a blind eye to sexual assault.

As we wade our way through Sexual Assualt Awareness Month, I wonder when the argument of historical positionality loses its effect? Placing judgment on a publication predating many of our lives but postdating the release of the first personal Mac computer feels sticky but nevertheless critical, especially as both the Director of Security and the number of reported cases remain the same today. The University’s website displays only three reported incidents of “rape/forcible fondling” in 2019 based on numbers compiled by the Director of Security Services.

Reluctance to report is not a new or surprising issue. A student seeking anonymity due to content sensitivity spoke with The Trail about their reporting experience. For the sake of anonymity, the student is henceforth referenced as Doe.

“The ‘official’ reporting process got me nowhere and the burden was on me to change my life around,” Doe said. The student further explained the warnings they received during the beginning stages of reporting. “When I went to Title IX, I was told that an investigation would entail talking to all of my friends, all of his friends and that all of my sexual history would be aired,” Doe elaborated, “they basically told my life would be deconstructed in front of everyone and there was no guarantee that he would be held accountable.”

When asked about their experience with other on-campus resources, Doe noted that “It never occurred to me to go to peer allies because I would never want to burden another student with that work.”

Currently, Peer Allies bears a hefty weight in providing emotional support as well as simultaneously crafting workshops and resources. Lacking administrative support and the absence of a liaison between Peer Allies and the Title IX office places students in highly autonomous roles without adequate support or training.

While there is an overwhelming amount of content from the ‘92 article worth unpacking, a pertinent endnote is Badham’s assertion that “The biggest reason crime happens is that people have that feeling that this is a safe place.” No matter the intention, the implication that your four-year home is in fact a place of danger and the only way of preventing sexual assault is to keep your guard up should concern us all.