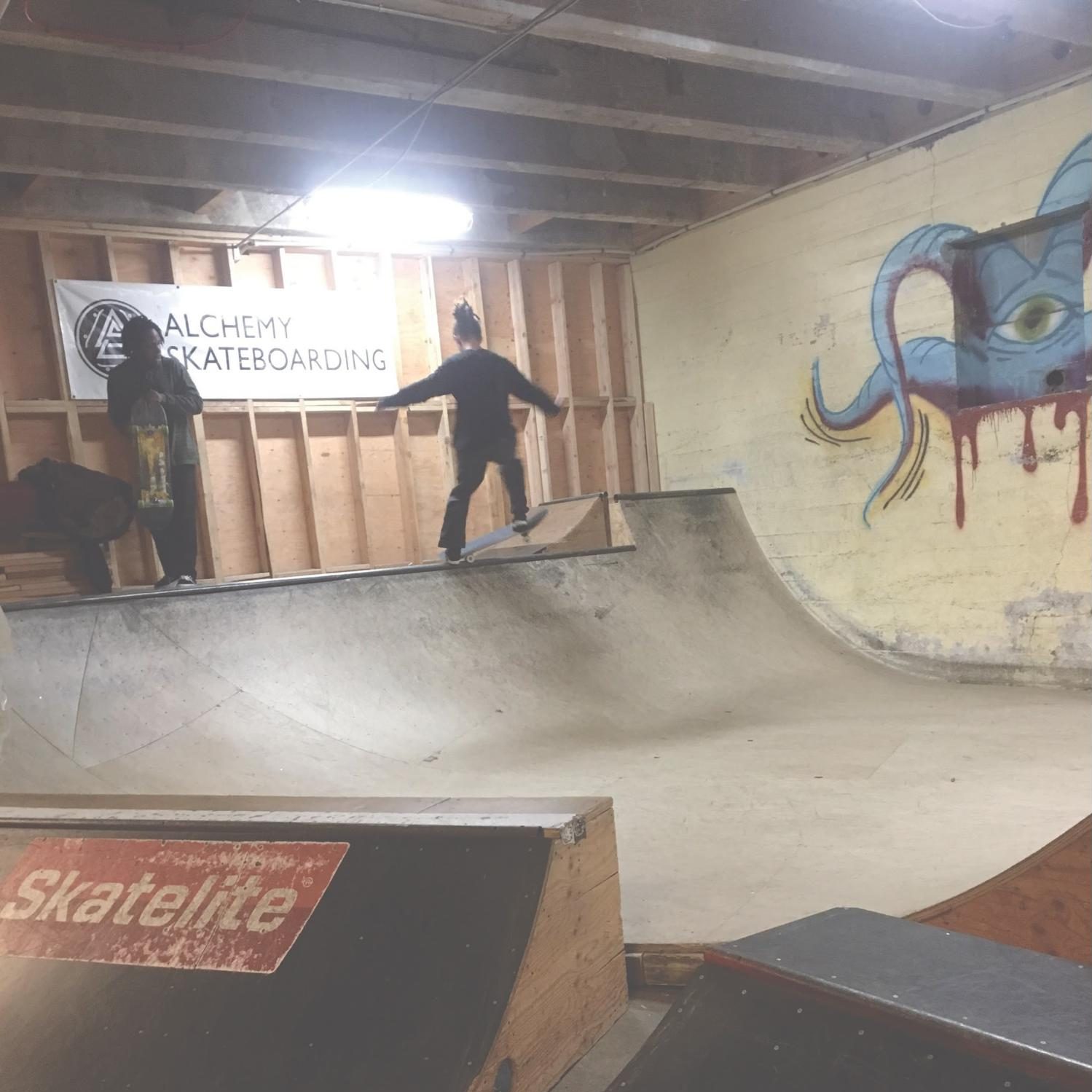 Skateboarders took to the ramps of the indoor skate park at local non-profit Alchemy Skateboarding, during their fundraiser on Wednesday, Oct. 17. The kickoff for the “Alchemy is Real” campaign was shared with an excited crowd that seemed eager to help.

The Alchemy is Real campaign is working to raise $35,000 to continue and expand Alchemy’s programs, which use skateboarding to positively enhance the lives of Tacoma’s youth.

Event attendees mingled in the shop and around the indoor skatepark, enjoyed the provided food, and asked each other how they “knew alchemy.”

Halfway through the event, Alchemy co-director Taylor Woodruff introduced the Alchemy is Real campaign and shared a volunteer-made video. After the video the crowd clapped and headed to the iPads set up at the front of the shop to donate to the campaign.

During the event skaters succeeded in their tricks, and the crowd cheered, and as the skaters fell and made mistakes, the crowd cheered even louder. This spirit shows the main focus behind Alchemy; that skateboarding teaches people to fall and get back up.

“When you skateboard, one of the first things that you have to learn how to do is fall down and be able to laugh at yourself and get comfortable with other people who are doing the same thing, and that requires lowering certain boundaries and relying on one another to help each other learn,” Puget Sound senior Jenny Paul said. “Quite literally you have to pick each other up when you fall.”

Paul was an intern at Alchemy this past summer as part of a summer internships program at Puget Sound.

Paul spoke of her interest in non-profit work and saw an internship at Alchemy as an opportunity to get back into skateboarding.

Beyond being a skate shop and an indoor skatepark, Alchemy runs programs and camps that teach young people in Tacoma how to skateboard. Alchemy believes that through their programs their students will learn grit and confidence.

“Kids learn the things they are capable of. … They start to form these relationships of trust, mutual respect and camaraderie at a young age,” Paul said.

During her internship, Paul taught skate lessons, helped run the shop and worked on the pop-up skate parks that Alchemy held.

Woodruff described Paul kindly and praised her dedication as an intern who is still supporting Alchemy even after her internship. Paul, like the other employees and volunteers of Alchemy, is passionate about the non-profit and the fundraiser.

One of the Alchemy programs which Woodruff discussed was the Mentoring, Educating, Transforming and Leading through Skateboarding. (METALS). The program is used as a tool to help youth transition out of the juvenile court system.

The program offers these kids an opportunity to build a positive network of supporters, mentors and friends around them.

In addition to the METALS program, Alchemy offers skateboarding classes through local schools. In the high school programs at Tacoma School of the Arts (SOTA) and the Science and Math Institute (SAMI), students can earn physical education credit at Alchemy rather than in a traditional gym class.

The school programs also extend to Jason Lee Middle School and a new program has just been created with Lister Elementary.

There is a leadership program called the Sponsored by Alchemy Leadership Team (SALT), skate camps that are offered when school isn’t in session, and open skate time six days a week.

The elementary skate class is one of Alchemy’s new expansions and hints at the growth that Alchemy has been working on to keep involving more people from the community.

Woodruff spoke often on the idea that Alchemy is an organization that reflects Tacoma. Alchemy Skateboarding was part of the Spaceworks program that helps to train and support new businesses in Tacoma.

Additionally, Alchemy’s building in downtown Tacoma was a space that was vacant for a long period of time before being reclaimed and rehabilitated by Alchemy. Alchemy, like other businesses and places in Tacoma, is growing and changing.

“Tacoma is a blue-collar town full of hardworking people that work to make the changes they want to see. … Alchemy is an organization that is created by people who are passionate about skateboarding and we have created the change we want to see. Now we just need the resources to support it,” Woodruff said.