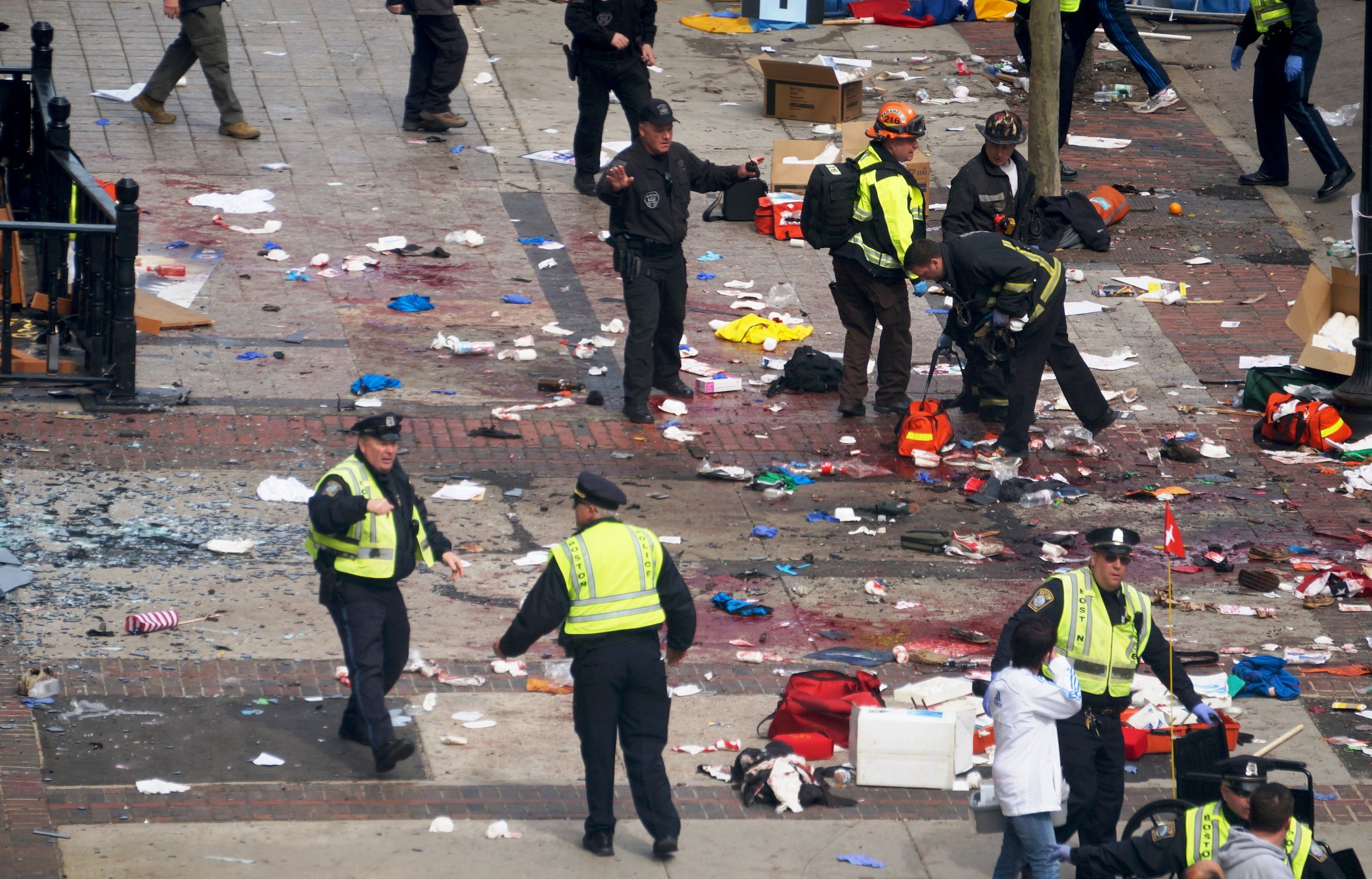 Two bombs exploded at the finish line of the Boston Marathon on Monday April 15 at 2:50 p.m. Eastern time, killing three and injuring 176 more. Seventeen of the injured are reported to be in critical condition by the Boston Globe at the time of writing. Government officials and national terrorism experts have not yet determined who is responsible for the attacks, and no group or individual has come forward to claim responsibility.

Multiple news outlets (Slate and The Boston Globe, among others) are indicating that the bombs were composed of pressure cookers which had been filled with gunpowder, nails, ball bearings and other scraps of metal. Authorities on Monday also defused an additional three bombs before they were able to go off, successfully preventing more violence.

The FBI will investigate the bombings as an act of terrorism, Pres. Barack Obama said in a statement to the press early Tuesday. In a statement Monday night, the President stressed that “any responsible individuals, any responsible groups will feel the full weight of justice.”

Government officials hold that there was no intelligence within the national security agencies indicating such an attack was to to take place, and no groups have claimed responsibility for the bombing. The Pakistani Taliban, however, said they had no connection with the attack, according to CNN.

“I received two top secret briefings last week on the current threat levels in the United States, and there was no evidence of this at all,” New York Representative Peter King told the media.

Police immediately halted the marathon and directed the remaning runners away from the finish line, and to Boston Common and Kenmore Square.

Government officials, ranging from members of the House Homeland Security Committee to President Obama have called the attack a “terrorist” attack, and the president has offered the “full resources” of the federal government in responding to the crisis and finding out who is responsible for the  bombings in a press conference held Monday evening.

Reacting to this event, I’m angry, sad and disheartened; paradoxically, though, the attacks also revealed the incredible compassion that human beings can have for complete strangers. There were reports of marathoners continuing their run past the finish line to Massachusetts General Hospital to donate blood for victims. Other reports include students from Boston University running to hospitals so that they could also donate blood. Videos in the aftermath of the bombings show humans coming together, helping one another, in the wake of a faceless, impersonal, wanton act of violence with no declared purpose.

Usually when stories like this happen, I have to wonder how much of a personal relationship to the story a journalist has. I’ve often assumed that stories written about events like this are parasitically feeding off of the suffering of other humans for the sake of a headline. I hadn’t accounted for the possibility of someone I know (or that any reporter knows) being put in an actually life-threatening situation.

My best friend, Maya (not her real name), was at the Prudential Center in Boston when the two bombs went off.

The Prudential Center was not the actual site of the bombings, but in the confusion that followed my friend had been close enough to the bombs to think that they had exploded in the Prudential building itself. She described a
“stampede” of people trying to run from the building and said that she didn’t have time to collect her things before she was caught up in the crowd fleeing the building.

I first heard about the bombings from Maya, who texted me at 3:11 p.m. (21 minutes after the bombs first went off) saying, “There was a bombing at the prudential center I was inside I’m ok … I was so scared I was gonna die I’ve never been so scared.” The text was rushed, panicked, and a direct snapshot into the psyche of my best friend as she lived through one of the most traumatic events in her life. She did not have time for commas or other conventions of grammar that her iPhone did not insert for her automatically.

For the rest of the day, I tried to frantically piece together what was happening in Boston. I didn’t want to call my friend right away, because I didn’t want to distract her from doing what she needed to do to stay alive in that situation.

We texted throughout the situation and  spoke on the phone later, but suffered from the same connectivity problems that everyone in Boston was having on Monday. There were so many people trying to contact their loved ones that the Boston cell towers overloaded their capacity, making phone calls both unreliable and choppy if you were even lucky enough to have your call go through in the first place.

Interestingly, Maya texted that “People are saying it was just something simple that got blown out of proportion” as she was trying to piece together what was happening on Monday, as it was happening. I have not been able to find other media reporting that people thought it was “something simple,” like a controlled demolition gone awry, but it seems that people on the ground were interpreting the events that way before the authorities determined that the explosions definitely had a violent purpose.

Authorities have not determined who is responsible, including whether the attacks were perpetrated by domestic or foreign groups or individuals. Regardless, I don’t see how any ideology could justify this particular act of terrorism. The Boston Marathon is just a thing that people in Boston go to to have fun. On Sunday Maya had been excitedly talking to me about “Marathon Monday” and all the fun that she was going to be having.

The Boston Marathon is not a symbol of capitalist oppression, of imperialist tendencies, of environmental destruction or of big government coercion. I cannot think of a possible reason why somebody would have chosen that particular spot to attack aside from merely wanting to hurt individuals in as public a way as possible.

As I noted earlier, the make of these bombs appears to have been modified pressure cookers filled with explosives and chunks of metal. These were designed to hurt people. The terrorist or terrorists responsible did not want to merely damage property: They built these bombs with, ostensibly, the intention of hurting as many people as possible.

That’s the reason I’m more than comfortable calling whoever is responsible for the bombings a terrorist. I’m usually cautious about the term, especially when using it to describe a foreign group with particular ideological beliefs, and I don’t think I’ve ever called someone a terrorist in a newspaper story in four years of writing for newspapers. But whoever did this is a terrorist. They acted with the malicious intent to kill as many people as possible, to cause as much damage as possible, at a location which was peaceful and which did no harm to them.

It is important that we keep in mind that everyone is innocent until proven guilty by a court of law. But it is additionally important to keep in mind that someone is responsible—that some human somewhere in the world decided to kill three individuals, wound 176 more and to scar the psyches of the entire city of Boston.

I cannot express in words how glad I am that Maya is alive and well, that she managed to escape that situation unharmed, and that she’s going to be able to come home this summer. But some people aren’t so lucky. People’s best friends, loved ones and relatives were killed or seriously injured. Not everyone was as lucky as Maya, and not everybody is as lucky to have their best friend alive after Monday. Maya survived by mere luck of fate. If she were only standing outside of the building, maybe 200 feet away from where she was, then she may have died. I can only thank fate that she managed to make it out of there and to a safe place in time.

Whoever it is, and for whatever reason they did this, they deserve to be brought to justice in accordance with the law. Being a philosophy major, I’ve often made fun of people who invoke the desire for “justice” at all. I’ve often thought it is a hollow term, signifying nothing, an empty phrase that we throw around to make ourselves feel better when we realize just how much evil human beings are capable of.

But whatever justice is, it certainly isn’t doing nothing; whatever it is that we mean when we invoke “justice,” it cannot be passively sitting in Tacoma as our friends in Boston suffer the injuries of murder and terrorism. Even if “justice” is a myth, even if Thrasymachus is right, we cannot let ourselves sit by as human beings suffer, their bodies literally broken by shrapnel and their minds breaking still as waves of suffering come crashing through. Whatever it is that justice is, it demands a response.

I don’t really know what we can do in Tacoma to secure justice for Boston. I don’t really know how to best respond to this tragedy. I suggest that we treasure the friends and loved ones we have near us and that we call our friends on the East Coast to make sure they’re okay. If anything, these bombings demonstrate that human life is fleeting and can be snuffed out at the smallest of things. But life’s precarious nature should only make us care more for our friends. It’s not clear how much longer we might have them for.