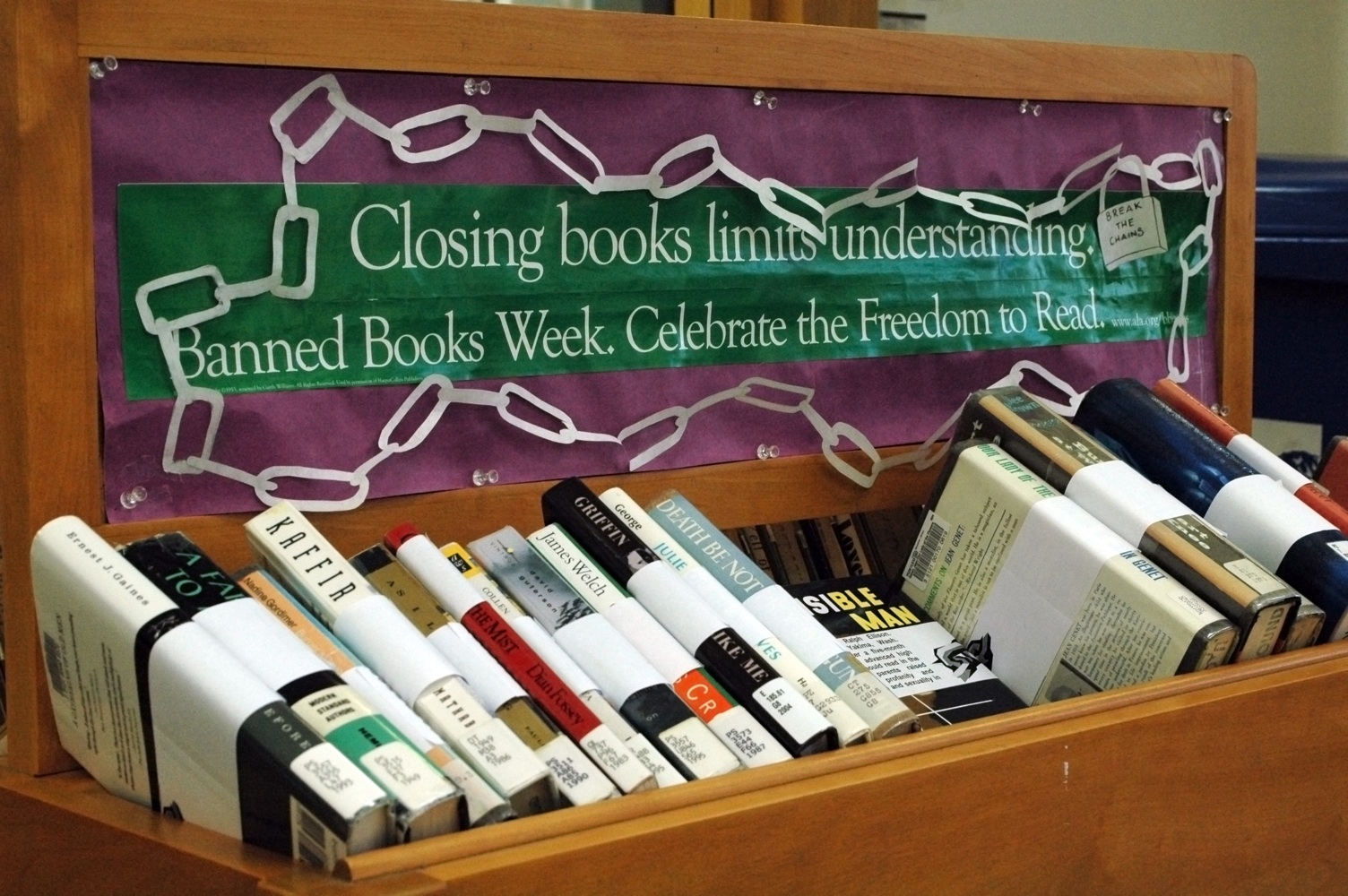 Collins Library celebrated Banned Books Week Sept. 30 to Oct. 6 as part of a well established national event that advocates for the freedom to read.

This marks the 30th year since Banned Books Week began.  Organizations that support and participate in Banned Books Week span the book industry and related fields, including the American Booksellers Association, American Society of Journalists and Authors, Association of American Publishers, American Library Association, National Council of Teachers of English, and the National  Association of College Stores.
While the argument for the freedom to read has been institutionalized across many book-related fields, the banning of books is still an issue.

Banned Books Week is both a celebration of the freedom to read and an endeavor to generate awareness of this issue.

“The Collins Library recognizes Banned Books Week to bring attention to the support of the freedom to seek and to express ideas, even those some consider unorthodox or unpopular,” Collins Library director Jane Carlin said.      It is Carlin’s belief that a library should raise awareness about book banning for the primary purpose of prompting an individual to reflect on the issue.

The Collins Library celebrated Banned Books Week with this aim in mind by using numerous avenues to attract attention from the campus community.

A display near the library’s entrance, along with posters and Facebook posts, garnered initial attention. The library educated those interested through the display of banned books and the daily blog entries posted during Banned Books Week.

The display and blog posts featured books that have been challenged, meaning that a group attempted to ban the book from either a library or curriculum.

“The library wanted to alert students that many books that are considered standard reading material have been challenged by many organizations,” Carlin said.
Among the books the library drew attention to are a biography on Ghandi, Kurt Vonnegut’s Slaughterhouse-Five, and the recently popular young adult book The Perks of Being a Wallflower.  In recognizing some potentially surprising candidates for ban, the library also demonstrated the breadth of books subject to challenge.

The underlying issues of book banning are censorship and the rights of individuals.  The primary right at stake, many organizations, libraries and other “freedom to read” enthusiasts claim, is the freedom of expression.

In addition to Banned Books Week, Collins Library supports freedom of expression by featuring art, like the photo essay of the May Day marches in Seattle that protested against a Wells Fargo branch that was accused of profiting by detaining immigrants.

As part of next year’s Banned Books Week, the library will house a collection of art that commemorates the bombing of Baghdad’s book-selling epicenter, Al-Mutanabbi Street.

The value of freedom of expression and especially the freedom to read resonates within the Tacoma community as well.  The local bookstore Kings Books makes something for Banned Books Week each year.

This year, it is a small book titled Open Mind Before Striking: An Inflammatory Guide that includes recommended banned reading and quotations from authors on the freedom of expression.

“Banning books is a way of preserving the old way of thinking, rather than letting society change as new ideas are thought of,” student Alena Karkanias said.

Often, books are challenged because the material is deemed inappropriate for children.  Karkanias also points to the paradox in book banning.

“Being able to talk about controversial topics helps children develop critical thinking skills that help them evaluate new material,” Karkanias said. “Restricting the access to information, whether it is fiction or non-fiction, stifles expression or learning.”
That is what Banned Books Week aims to show individuals, Carlin said.  “Everyone has the right to read what they want.”