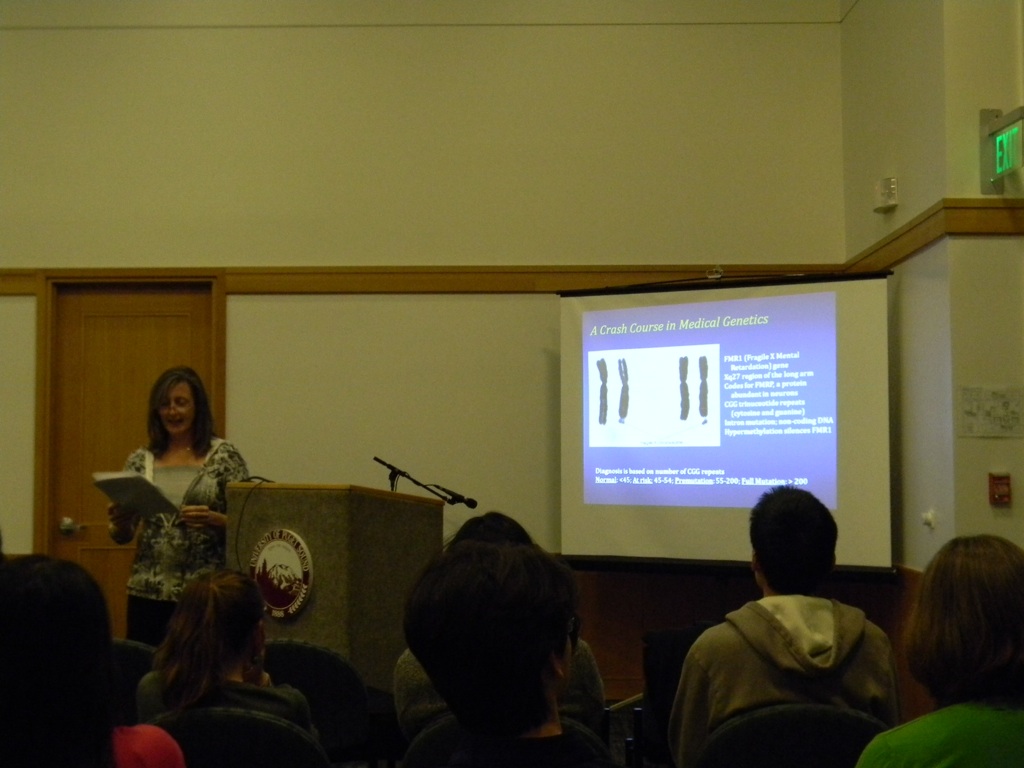 On Tuesday, Nov. 29, Professor Robin Foster presented a lecture focusing on the story of a family that carried a specific genetic mutation called Fragile-X, the gene that causes mental retardation and autism.
She plans on writing a book about the family’s story in order to help people gain a better understanding of the complications of the gene and how it affects both those who carry it as well as those who show symptoms. The gene mutation cannot be cured, unfortunately, but its effects can be controlled with medication.
The lecture began with the introduction of the family, more specifically the mother, who Foster called “Determined”—real names were changed in order to protect the privacy of the family members. The mother had two children. One was from her first marriage, which ended in divorce. Determined later remarried and had another child, a boy called Zach who was diagnosed with autism.
Determined, Foster said, had thought it was her fault that her son had autism. She constantly looked for ways to help her son but could find none. Eventually, she found an article that detailed the discovery of the gene called Fragile-X.
Foster continued Determined’s tale by relating the experience the mother had, desperately trying to get her son tested to see whether he had the newly studied gene. Her initial attempts were unsuccessful; she was told that Zach did not fit the profile the doctors and scientists were looking for.
After some time, Determined was finally able to make a case for her son. Foster explained that Fragile-X is the most common gene known to pass on the causes of mental retardation and autism. The symptoms vary, but they include autism, language and memory problems, sensitivity of the senses and poor social skills, to name a few.
The carrier of the gene—in this case the mother—shows few, if any, symptoms. In this case, the gene must have come from the mother because of Determined’s genetic history, but the gene can come from either the mother or the father. The carrier can pass the gene on to up to 50 percent of children born.
In this particular family there are five sisters who are all carriers of the Fragile-X gene. Three of the sisters have had children, all of whom have a 50-50 chance of inheriting the gene, which can worsen as it is passed on.
The opportunity this family presented to the scientific community was enormous, because they were able to map how the gene was passed through three generations of family members. The University of Ohio wanted to study the family’s genetic map in order to gain a better understanding of how Fragile-X affected the family. The University offered free testing and counseling.
The first sister, who Foster called “Faith,” refused testing and encouraged her family to do the same for religious reasons. Determined was the second sister and wanted to know more about Fragile-X. The third sister, “Loyalty,” was torn between wanting to know more information and agreeing with her eldest sister. The gene had already affected the fourth sister, “Innocence.”
Innocence had a mental impairment and epilepsy. Although she was able to hold a job, her family became concerned when she met a man and wanted to get married. They worried about her safety and the possibility of passing on the gene. Her nephews even went so far as to kidnap her from her boyfriend’s home and bring her back to the family so she would be safe. Innocence protested but to no avail.
Innocence’s family wanted to have her sterilized in order to prevent the gene from being passed on to any children she might have. Despite their wishes, Foster explained, the family could not have her legally sterilized because of her right to self-determination—the ability to make her reproductive choices for herself. However, eventually, she agreed to live in a group home.
The fifth sister, “Reason,” was already married and wanted to have a family with many children. When she finally got pregnant, Reason decided to have an amniocentesis at 17 weeks to be tested for the Fragile-X gene. When the tests came back, she was told her baby boy had the gene mutation of the worst magnitude. A decision had to be made about what to do.
Reason and her husband both wanted a big family, but they wondered whether it would be possible to raise more kids with one already being disabled. Would there be enough money or enough time?
Eventually, Reason chose to get an abortion. She was worred that she and her husband would not be able to handle the responsibility of raising a child with such severe disabilities. Reason sent the fetus to be studied in South Carolina so that more could be learned about Fragile-X.
Sadly, Reason was unable to have any more children because of complications from the abortion. She and her husband wanted to try again. They moved to Washington and visited a doctor at the University of Washington to get advice.
There were many options, but they ended up not being pursued do to Reason’s divorce from her husband. Reason returned home to Ohio and eventually remarried.
The story Foster wove about this unique family was fascinating and moving. Although she is unsure how to present this story in her book, Foster said that there is a “preoccupation with the science and not so much the people” in studies about autism and mental retardation. It is Foster’s hope that she will be able to change this perception of the Fragile-X gene and create a new perspective concerned with the affect it has on families who carry the gene.