The Trail
HomeFeaturesStudent art and crafts on display
Features

Student art and crafts on display

Last Saturday, the Rotunda was transformed into a bustling market place showcasing the do-it-yourself creativity of the Puget Sound student body at the biannual Student Market. On display were tie-dyed tennis shoes, vegan baked goods, rocks wrapped in wire, those ubiquitous feather earrings, bee balm, homemade pasta, canned pickles and more.
The vendors were as varied as their goods. Preston Van Buren of The Hive Minders, the on-campus apiary, wore bee antennas with considerable aplomb while recent graduate Liz Bird had her business cards on display along with her jewelry. To add to the eclectic atmosphere, ambient circus performers juggled and somersaulted in a corner while KUPS DJ Tai Koga played Blondie in another.
To participate in the Student Market all you have to do is sign up. Maggie Shanahan, Holly Kvalheim and Claire Armstrong organized the past two markets, after face painting at previous ones.
“We take everything, you just have to make it yourself,” Kvalheim said.
“We’re really open to anything, we didn’t know what ambient circus was, but it’s really cool to have them here,” Shanahan said.
For vendors, the Student Market is a unique opportunity. Bird tables at the S.U.B., but she prefers the Student Market as a time to see what other people are doing.
“I like being here and seeing what other people my age are doing. It’s interesting to look around and see that one person spends their free time making hats and another person has a whole lot of pickles,” she said.
The Student Market is backed by Students for a Sustainable Campus and is held once a semester. This year was the first time it was held in the Rotunda, a fortuitous decision considering the rain.
The idea for the Student Market was born in 2008, when freshman Julie Moulton noticed that many of her friends made incredible crafts and food, but had no place to come together and share them. Moulton has since left the school to travel, but S.S.C. members Ellie Barber and Justin Roberts decided to make her vision into a reality. The first Student Market was held outside the S.U.B. in the fall of 2009.
Two years later, Roberts looked out on the market and was pleased to see it continuing to flourish.
“I didn’t do anything to organize this one and it’s really awesome to see it turn into a self-sustaining event,” Polly Membrino, who was also involved from the beginning,  said. “I’m hoping to see this continue for years after I graduate.” 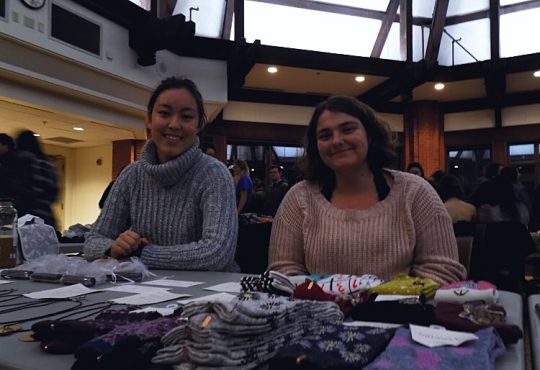