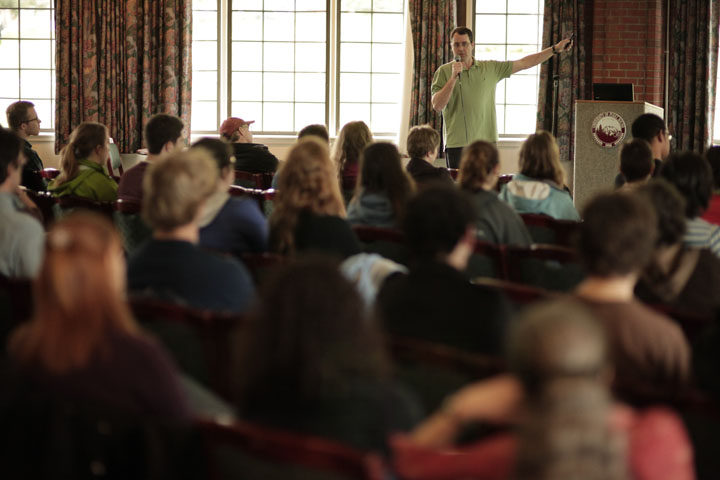 The lecture, called “A Left-Wing Critique of the Diversity Program,” was met with mixed reactions even before it took place. Several posters advertising the talk were vandalized to show disagreement with the ideas that the posters conveyed. Headed with the statement “Colorblind is not racist,” the signs were edited with black markers so that the “not” in the statement was crossed out, thus conveying a completely contrary meaning to what Anderson-Connolly intended.

“I thought [the vandalism] showed a lack of commitment to a diversity of ideas. Why not try to just debate the idea?” Anderson-Connolly said.

Even with dissent expressed toward Anderson-Connolly’s message, a number of attendees were present at his talk, which suggested that the priorities of the University’s diversity program are misplaced.

Taking a radical left position, Anderson-Connolly asserted that the most effective approach to the issues of diversity is one of colorblindness—an idea which, he made clear, does not mean denying the presence of prejudice in society, but realizing that race is a social construct without biological significance, and one that should have no bearing in the creation of laws and policies.

These ideas, he said, are tied directly to the left-wing principle that all people should be treated equally.

“Efforts should move us in the direction of liberty, equal opportunity and the equality of outcome,” Anderson-Connolly said. “The diversity program does not move us in that direction. The rectification of race distracts from economic issues.”

The economic issues, according to Anderson-Connolly, are becoming more relevant to concerns of justice and equal opportunity as time goes on, and should therefore be placed at the forefront of those efforts.

“Class conflict has been getting worse, but it’s still assumed that the mechanisms are the same as they were five years ago,” he said. With statistics showing that issues of race are becoming less relevant while class conflicts are becoming more so, Anderson-Connelly said that in maintaining a focus on race, “we’re not focusing on the problems that are getting worse, we’re focusing on the problems that are getting better.”

In terms of a change in the diversity program, Anderson-Connolly concedes that not much alteration of policies can occur at the academy level, but insists that Puget Sound should “at least do no harm.”

This includes not discriminating during hiring and admission, which he acknowledges is not an issue, but also not legitimizing the construction of race as part of the diversity program.

“I don’t think there’s going to be much change on campus, but I do want to equip students with a critique of the program from the left,” Anderson-Connolly said. “It’s good to know that critics of diversity are not necessarily from the right. Hopefully in the future critics won’t be labeled racist or conservative.”

An hour-long question and answer segment, in which supporters and opponents voiced their concerns and questions about Anderson-Connolly’s ideas, followed the talk.

“I thought that he [Anderson-Connolly] could have talked more about real situations than theory. The theory behind what he was saying was very interesting, but if he talked more about specific situations at Puget Sound I think his argument would have been more solid and almost unflappable,” student Jessica Spevak said.

Student Casey Krolczyk, who attended the talk, said, “I think if we really want to call ourselves liberal individuals, we have to go to events like this.”

“While I didn’t agree with some of what he [Anderson-Connolly] said, the most valuable thing I’m taking from this is that my own ideas are more solid, and that this is a great event to challenge beliefs,” Spevak added.

“I thought there was a good discussion. I think getting these ideas out there made this worth it,” Anderson-Connolly said.