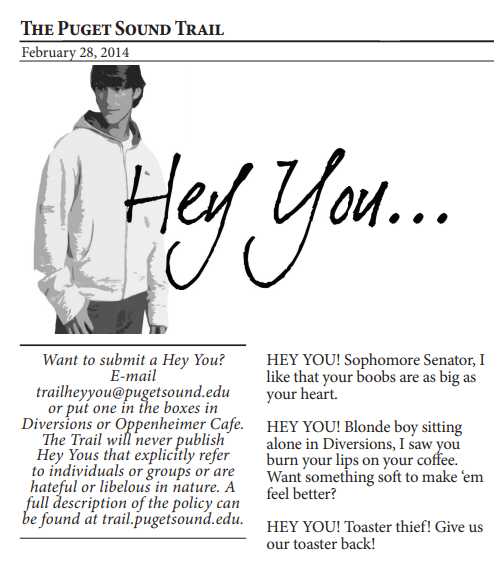 I’ve recently read and heard major discourse regarding this year’s freshmen — most of which is negative. As far as the seniors I’ve spoken to are concerned, this batch of babies is crazier than we ever were. This sentiment usually arrives in conjunction with a upsmissedconnections post; whether it’s “vacuum” ravaged boyfriends, freshmen thirsting for their SSI professors, or the couple who likes sappy sex — it seems two years *inside the house* has left some with an itch in serious need of scratching. Blame for any wildly horny, inconsiderate and downright weird behavior usually lands on campus’ newest additions, with the reasoning that they simply went without social priming in critical years of their juvenile development. And while this is undoubtedly a sound hypothesis, I present you a series of lurid “Hey You’s” proving Puget Sound pupils have never been anything but lofty horndogs.

While first-years may be lacking some serious socialization skills, it seems unfair to wholly blame them for the wacky submissions we’ve been seeing. The fact of the matter is most of us are shitty people that do shitty things and just want to have sex all the time but have regrettable communication capabilities — it’s not COVID, it’s unsupervised, premature adulthood.

Some of you may be wondering if the recent uptick in Trail and upsmissedconnections crossover means we are in cahoots — sadly, just like most of you mere mortals, we have no idea who runs the infamous account, and are simply exhibiting some significant fan behavior. For anyone wondering why the paper stopped publishing “Hey You’s”, maybe reread the submissions and consider public responses if we used our platform to share all of your intrusive thoughts in 2022. But if you think we’re just being boring and would like to see the return of “Hey You’s,” tell us using the QR code. Check out the Archives for more *historical understanding* of our predecessors and note that while we have upsmissconnections, there was a facebook page, University of Puget Sound Confessions, throughout the 2010s.