The Trail
HomeNewsStudents in Washington, D.C. protest the murder of George Floyd by police.
News 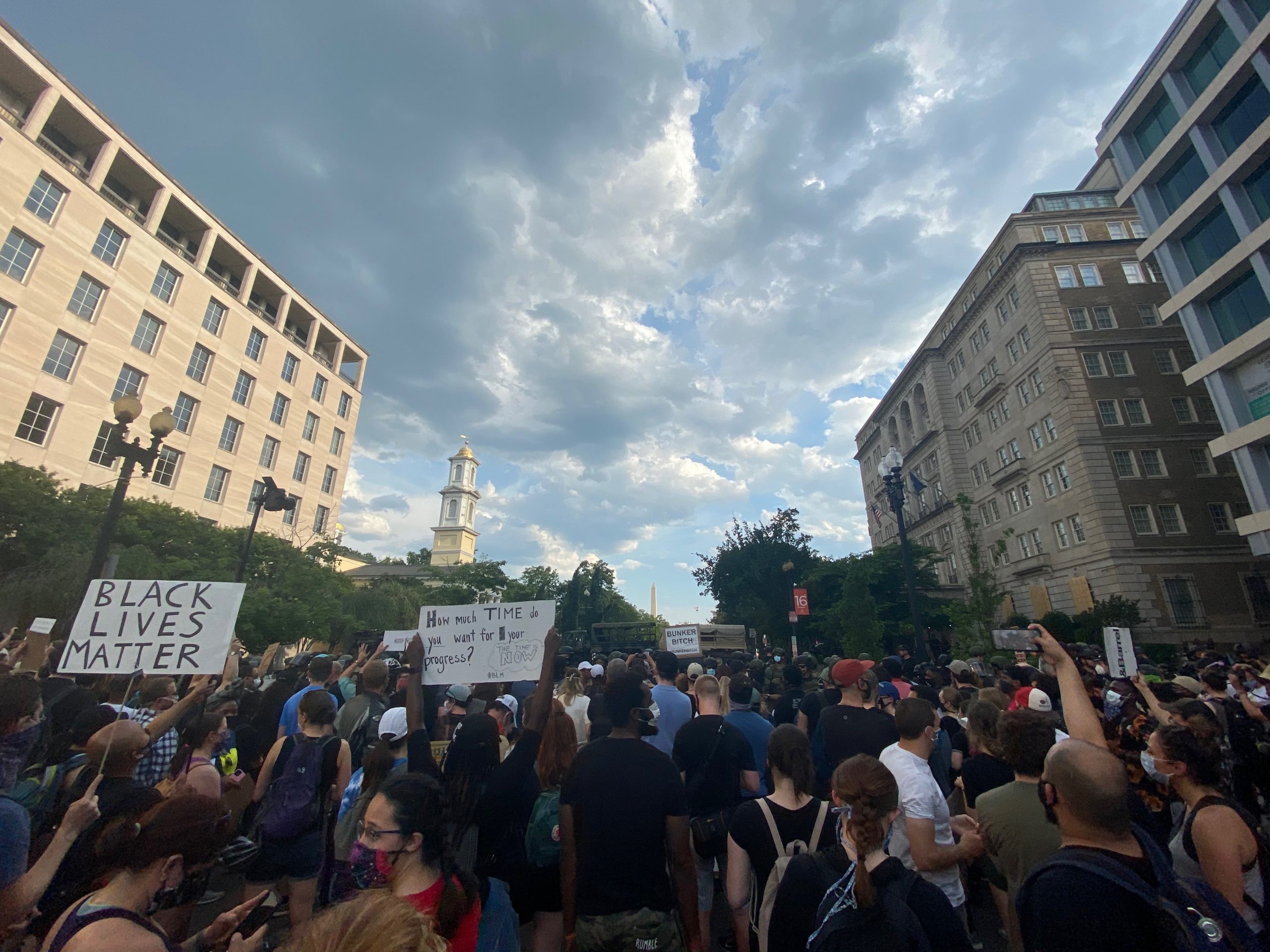 Puget Sound students Nina Weisbrod (’20) and Livi Plihal (’21) attended protests in their hometown of Washington D.C. over the murder of George Floyd by police in Minneapolis, Minnesota. Here, Nina and Livi recount their experiences and share photographs they took with the The Trail.

NW: “The first photo is taken around 16th and H  Street, which is on the north side of the White House. You can see St. John’s Church in the background. This was June 1st, and my entire family had gone there to protest.

“In Washington, D.C., Mayor Bowser had set a curfew for 7pm, so we decided to leave before then. Our meeting spot was actually St. John’s Church. We planned to meet there at 6:15pm so we could get home before curfew, because after that, things start to get more violent, with tear gas and rubber bullets.”

“We ended up leaving at 6:15pm, and then at 6:30pm, which was 30 minutes before curfew, Trump and the attorney general ordered the National Guard, Secret Service, and the police to clear the entire crowd with tear gas, just so that Trump could walk across the White House grounds to the church, get hold of a Bible, and take a photo… We were really lucky to leave 15 minutes before it happened.”

“Obviously, taking a knee is the bare minimum. A lot of people think it’s propaganda, or trying to portray a narrative that makes the police and law enforcement look good and the protesters look violent. But you know, it’s better than nothing. I thought it was a powerful moment for a federal officer to take a knee in front of the White House while he’s protecting our president. I think that moment could be used as propaganda, or to advance a narrative that the police are good, or on our side. At the end of the day, they’re still going to shoot tear gas and rubber bullets. But in my opinion, it was better than nothing.”

“That being said, I’ve seen so many videos of officers taking a knee and then tear gassing people right after. I do think the image may be used as propaganda.”

NW: “At the protests, there’s a common goal. People are there for one another, handing out free water, food, snacks, medical supplies, face masks, and hand sanitizer. People are literally standing there in the street just pumping out hand sanitizer, putting it on everyone’s hand.”

“It was one of the most incredible things I’ve seen or experienced in my entire life, walking down Pennsylvania Avenue in the middle of the street with a crowd of thousands and thousands of protesters, chanting, all unified, with our nation’s capitol building in the background. It was one of the most beautiful and inspiring things I’ve ever seen.”

LP: “The officer you see kneeling wasn’t doing that in an intentional act of solidarity. It was just a position to hold the line. There used to be fences in between them and us, but then all the protesters started tearing them down. So the Secret Service and the police were either kneeling or standing in a line like that. Behind them, there were hundreds of them on horses, and then behind them, hundreds more people kneeling with guns, ready to fire in case anything happened.”

LP: “As the week went on, people were were a little bit less angry. The first night when I went and took that picture, I was walking home and stores were smashed, people were setting trees and like dumpsters on fire and throwing smoke bombs at the police. But last night (June 6), it was just a peaceful march. There was like a moment of silence and we had some bands playing. It was more like a day of solidarity rather than a riot or a big protests against the police. It’s been more chill as the week has gone on.”