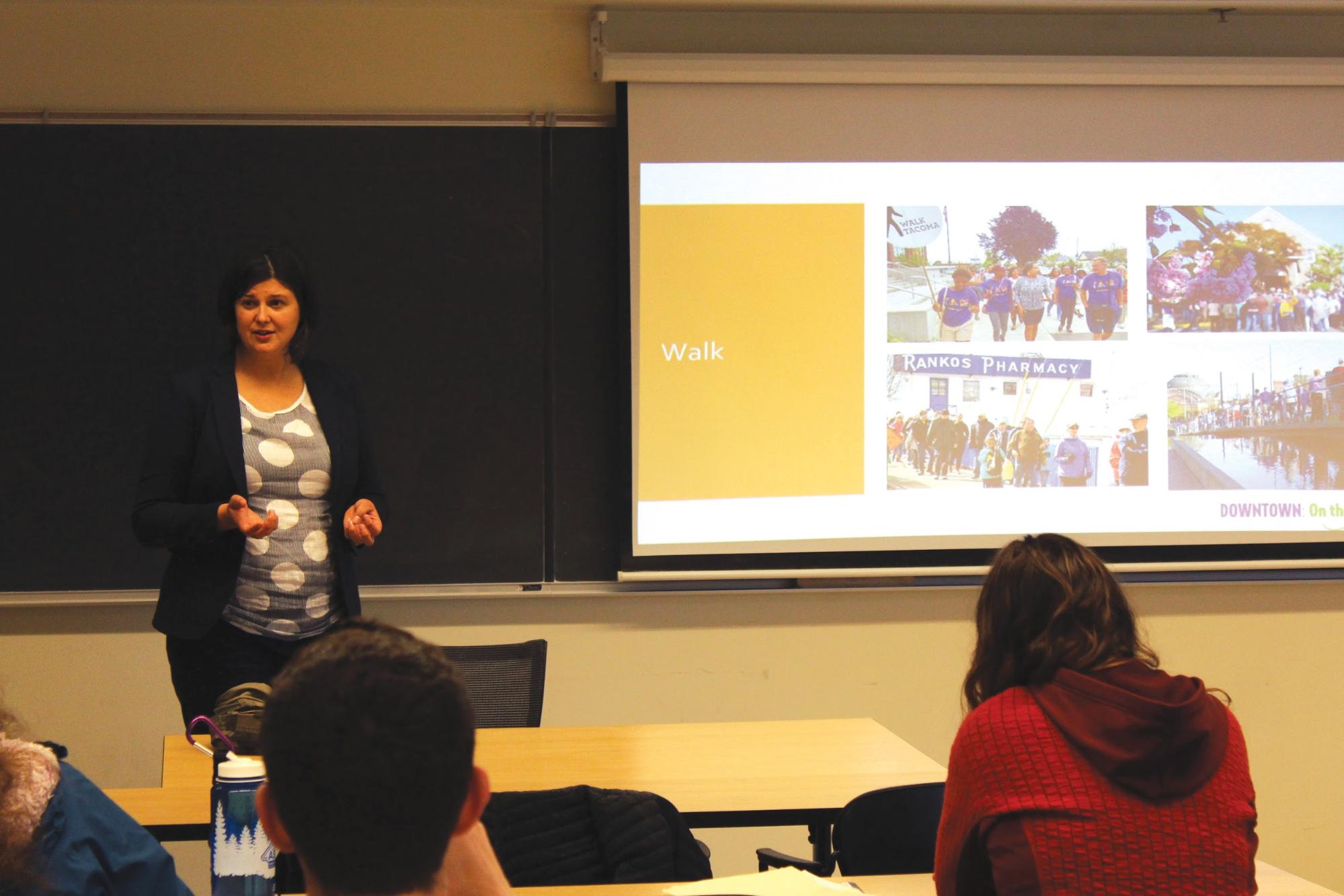 At the University, students are commonly asked to question privilege in the context of race, gender and sexuality, but have you ever considered the ways in which public transportation can be indicative of inequality?

On Tuesday, April 16, the Environmental Policy and Decision Making (EPDM) department brought Christina Walker and Hally Burt from Downtown on the Go, a transportation advocacy and education organization based in Downtown Tacoma, to talk about the intersections of environmentalism and anti-racism work in the realm of transportation and urban planning.

Downtown on the Go is a transportation management association that works to improve community transportation in the downtown Tacoma area. Formed as a partnership between the chamber of the city and Pierce County Transit, Downtown on the Go does everything from supporting transit-friendly ballot measures, event programing that educates citizens about the importance of public transit, to actually going out and supporting government projects to create more streamlined, effective and accessible public transportation.

“Our approach to this work is not to do away with any one mode of transportation,” Walker said, “but to reverse the focus as it has been for years and years.”

The focus to which Walker refers is, of course, single-occupancy vehicles.

It’s easy to take for granted the privilege placed on car-owners in Tacoma and the U.S. at large. But when governments invest on expanding highways instead of bus routes, what they’re really doing is privileging those with enough wealth to own cars and making it more difficult for people of lower incomes to have mobility in their own city.

Downtown on the Go aims to reverse what Burt and Walker call the “transportation hierarchy,” that places car-owners at the top, so that city transit can benefit everyone.

But transportation access is about more than mere convenience. As Walker and Burt explained, transportation and urban planning plays an essential role in dismantling systemic racism and allowing for more economic mobility.

Due to Tacoma’s long history of redlining — the practice of denying or limiting financial services to certain neighborhoods based on racial or ethnic composition without regards to the residents’ qualification or credit worthiness — the city has not invested in infrastructure and transportation services in neighborhoods with large populations of people of color.

This further exacerbates systemic cycles of poverty, as people who can’t afford cars are severely limited in their transportation options and as a result are also limited in their ability to seek out economic opportunity.

“Transportation is the second-largest cost for most families and a lot of that is impeded upon because of these kinds of racist land-use practices,” Burt said. So in this way, transportation access becomes an issue of racial concern, as well as an environmental one.

One of the ways in which Downtown On the Go seeks to dismantle these larger systems is by hosting Friday Forums, which bring together local leaders, experts and community members to have open conversations about transportation issues facing Tacoma.

“This is really the place where we take this big idea like transportation and we try to see where it intersects with other issues that people are working on,” Burt said. “Because no matter what the topic is we’re still living in a community that’s heavily segregated by race.”

Forum topics range from the ways in which race, gender and ethnicity affect the way people move through their city, taxing and how transportation is funded, to how good design and art enhance transportation.

“The goal of our forums is to really bring together those kinds of conversations,” Burt said. “A lot of people don’t connect housing and transportation, so we’ll host a forum about it.”

“I’m an environmental policy major and my main interest is in regards to environmental justice and working to address environmental racism, classism and ableism and I thought that this tied in really perfectly with that,” she said.

The lecture demonstrated the ways in which issues we usually think of as separate are actually deeply interconnected.