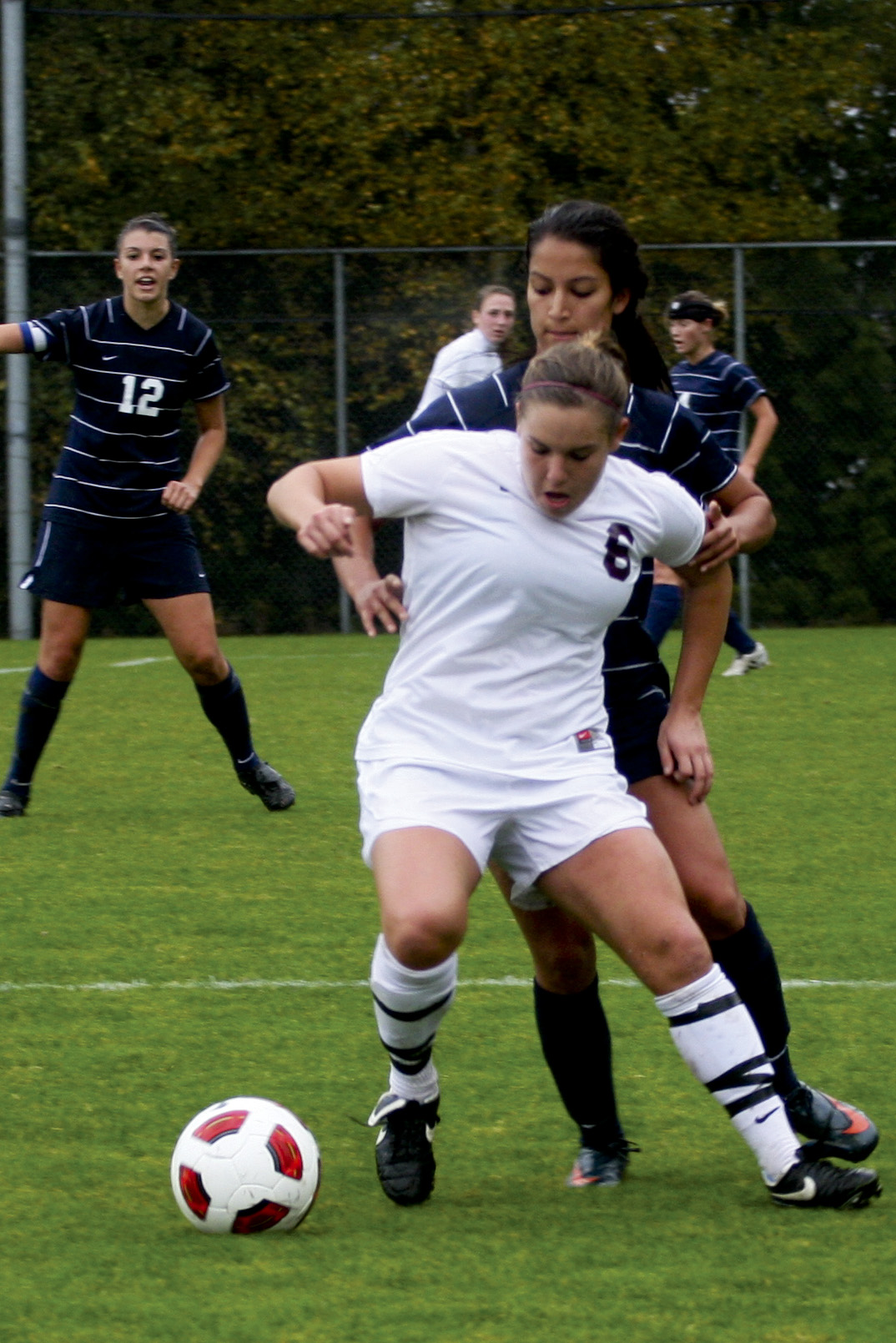 The Puget Sound women’s soccer team racked up two more victories this week, solidifying their holding on the top spot in the Northwest Conference with one week left of conference play.

The Loggers traveled to Pacific Lutheran on Wednesday, Oct. 27th for a matchup with the Lutes.  The Loggers dominated the match outshooting PLU 23-3 on the way to a 4 – 0 final score.  Fans and coaches alike were nervous about the outcome of the game until in the 71st minute when senior midfielder Kelly Andersen (Centennial, Colo.) assisted by senior midfielder Kayla Boortz (Greenwood village, Colo.) broke the force field that seemed to protect PLU’s goal, making the score 1 – 0.  This breakthrough led to two more goals within 47 seconds of each other.  Both goals were scored by junior forward Theresa Henle (Issaquah, WA), boosting her personal goal total to 14 goals this season.  Junior forward Jenny Moore (Kent, Wash.) put the icing on the cake with a goal in the 85th minute making the final score 4 – 0.

“Much of the game it felt like we needed more fire when attacking the goal. When Kelly scored that first goal, it opened the floodgates and really helped to boost our confidence in knowing that it was possible to score against PLU during that game. After that, we got 3 more goals and basically, the lesson we all took away from this was that we just have to believe that we can score and that our team will help us to do so.” Senior forward Molly Winterrowd (Tigard, Ore) said.

When Saturday rolled around the women’s soccer team was ready to take ownership of their home turf against George Fox despite the blistery weather.  It was an important game for the team being their last home game and senior day.

“I could tell from the moment we were in the locker room, with lots of energy and singing our favorite team songs, that my underclassmen teammates really were there to play for us seniors on our senior game and I was extremely grateful that they took to heart how much it meant for us to play in that game,” Winterrowd said.

The team knew the importance of this game and struck early.  After four minutes of play, Goss  found the back of the net for the first Logger goal of the day.  About five minutes later senior defenseman Serwaah Fordiour (Shoreline, Wash.), assisted by Boortz, made a shot that bounced off a defender and into the goal, making the score 2 – 0.  After twenty minutes Winterrowd sent the ball to Boortz who launched it over the goalie’s head boosting the Logger’s lead to 3 – 0.  Forty minutes into the game Goss caught a cross from Henle and made a goal off the rebound.  In the second half Boortz scored the last goal of the game from 25 yards out off a pass from Goss making the score an impressive 5 – 0.  The Loggers not only won against George Fox they out played them with an overwhelming 27 – 2 advantage in shots on goal.

“It was definitely a team effort and walking off East field, I could not have been happier with how well every senior played for our last home game of the regular season,” related Winterrowd.

Be sure to congratulate our lady Logger’s on their well earned victories and wish them luck for this weekend as they compete for the NWC championship on Friday at Pacific and on Saturday at Linfield.